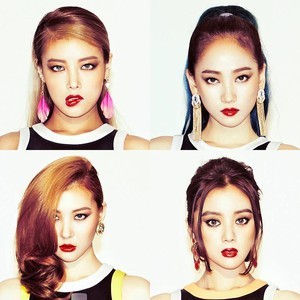 The Wonder Girls (Korean: 원더걸스) were a Korean Pop Music group that debuted in 2007 under JYP Entertainment and disbanded in 2017. Along with Girls' Generation and KARA, they are frequently cited as responsible for paving the way for future girl groups, especially when it comes to international recognition.

They scored a smash hit in 2007 with "Tell Me", the lead single from their first album. Both the song and the dance became so popular in South Korea that the phenomenon was dubbed as the "Tell Me Virus", giving the group much acclaim and recognition even outside their home country.

After releasing successful follow up singles, particularly "Nobody", which became an international hit, their status as National Girl Group was cemented. Seeing potential in the overseas market, Park Jin Young (the CEO and producer of JYP Entertainment) decided to send them to the United States - while their venture there wasn't exactly a flop, they didn't enjoy the success that JYP expected for them. After a long absence, they returned to promoting in Korea while still occasionally having another go in the US.

Fans were taken by surprise with the announcement of leader Sunye's pregnancy and marriage in 2012. They went on hiatus and eventually Sohee decided not to resign with JYP, and her and Sunye's departures from the group were eventually confirmed to be permanent. After three years of absence, they came back; this time as an actual band, playing instruments onstage.

The group disbanded on January 26, 2017, with Yubin and Hyerim staying in JYP Entertainment while Yeeun and Sunmi decided to move companies. Their final single, "Draw Me", was released on February 10 of the same year, commemorating their 10 year anniversary as a group. As of 2018, HyunA, Yeeun, Sunmi, and Yubin are currently solo artists, while Sohee is still in the acting career. Hyerim decided to pursue a college degree. Sunye made a television appearance in January 2018, her first variety show appearance in five years since her withdrawal from the group.

As of January 2020, Yubin and Hyerim decided not to renew their contracts with JYP Entertainment.

I want tropes tropes but you: