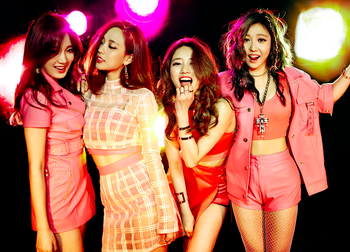 miss A (Korean: 미쓰에이) is a South Korean Girl Group. They debuted under JYP Entertainment in 2010 with their debut single, “Bad Girl Good Girl”. The song led to the group becoming the fastest girl group to take the #1 spot on a music show.

Before debuting, they drew attention in China as the “Chinese Wonder Girls”. The group was originally a five-member group called the “JYP Sisters”, which included miss A members Fei and Jia and Wonder Girls member Lim. Two of the members withdrew from JYP Entertainment, and Lim debuted as the final member of Wonder Girls. Lee Minyoung, who was a solo artist and had once formed a dance duo called “Little Winners” with SNSD’s Hyoyeon, and Suzy, a trainee, were added to the group to form miss A.

The group maintained its popularity until the promotions for their mini album “Colors”, after which the members focused on their solo activities. Fei was the first member to achieve a solo debut, with the mini album “Fantasy” in 2016.

After a successful acting debut in Dream High, youngest member Suzy rose to fame, leading to more acting projects and eventually debuting as a solo artist with the mini album “Yes? No?” in 2017. Her fame popularity rose higher upon the revelation that she was dating actor Lee Min Ho, one of the most popular Hallyu stars.

Member Jia left the group in 2016, leaving miss A as a trio. However, they never got to promote any group projects from the end of “Colors” up to Min’s withdrawal from JYP, which is speculated to be the reason for their disbandment in 2017.

Tropes related to Miss A and their music: