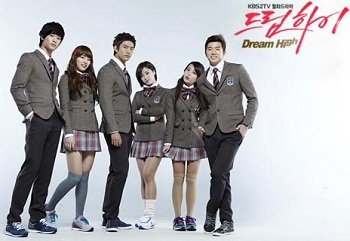 Dream High is a 2011 Korean Drama in which six aspiring arts students attending the famous Kirin Arts High School pursue their dreams of becoming stars. Most notable for being produced by two Korean Entertainment giants, Bae Yongjoon and Park Jinyoung (from here on out, JYP), and featuring a main cast consisting of mostly K-Pop Idol Singers. The drama begins with the news that a Korean artist with the pseudonym "K" has won a Grammy for the first time in 2018, and an interview with Bae Yongjoon's character reveals that K is one of the six. From there, the drama goes back to their time as students and tracks their growth. A pendant of a K in a circle becomes the symbol of the show, passing back and forth between the main characters as part of the mystery behind who is K?

Due to the popularity of the series, the show was followed by a sequel called Dream High 2 in 2012.