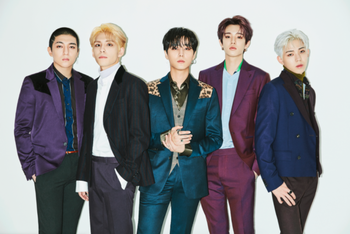 DAY6 (Korean: 데이식스) is a five-member Korean rock band under JYP Entertainmentnote More specifically, they are under the Studio J label - artists under that label exert full creative control over all aspects of their work.. They debuted on September 7, 2015, with the song "Congratulations" and its accompanying EP The Day. Since then, they have become well-known for their instrumental prowess, intensely honest storytelling and lyricism, tendency to blend rock with a host of other genres, powerful vocals and energetic live performances. They're all also quite possibly insane.

They originally had six members; Junhyeok left in February 2016 under ambiguous circumstances.

As of May 11th 2020, the band is on temporary hiatus due to Sungjin and Jae being diagnosed with anxiety and thus having to take a break.

In addition to their work with the band, Young Knote sometimes as Young One, Jaenote sometimes under the moniker eaJ and Wonpil also have active experimental solo side projects. Young K, Wonpil and Dowoon are also part of the synthpop-oriented subunit Even Of Day.

Not to be confused for American R&B boy band Day26.

Extended Plays:Every DAY6 Project note A series of singles and B-sides written and released monthly over the course of a year:Singles:Studio Albums: