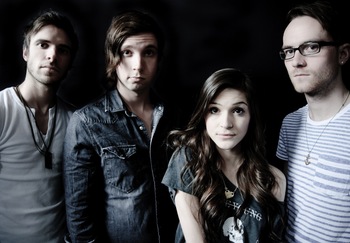 "We play music and we have fun doing it." - Original lineup (left to right) - Justin, Scott, Marissa and Josh 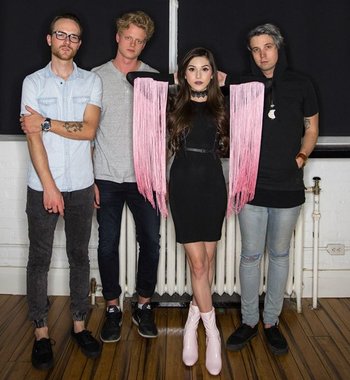 Crystalyne are a Canadian Pop Punk band formed in 2011 and based in Toronto. Their current lineup is:

Their original bassist was Justin Niece, but he stepped down from the position in July 2016 for personal reasons and was replaced with Keegan Beach.

They have released three EPs so far. Navigate was releaseed in 2012 and The Remedy in 2013. In May 2016 after some time away from the spotlight writing and recording they released the single "Air I Breathe" and followed it up with "Let's Do Something Crazy" in July 2016. Both songs were then included on their third EP Follow.

. Marissa is also a Twitch streamer under the name MarissaEmmaa (a portmanteau of her first and middle names), her channel is here

The band is currently on hiatus while the members pursue their own projects but are all still on good terms with each other so a future reunion is possible.