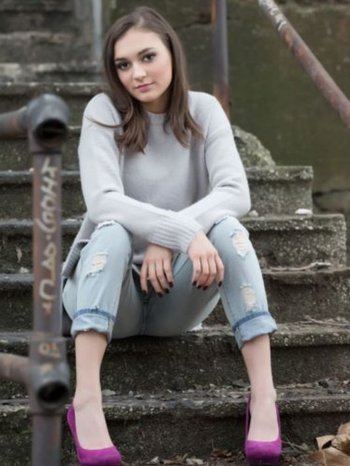 Don't let her down.
Advertisement:

Grace Martine Tandon (born October 24, 1998), better known by her stage name Daya, is an American pop singer born in Pittsburgh. In 2015, she pursued her music career at age 16 when she was signed to the labels Z Entertainment, Artbeatz and RED Distribution. She released her self-titled debut EP on September 4, 2015. The EP featured her debut single "Hide Away", which would eventually peak at #23 on the Hot 100. She then collaborated as a vocalist on The Chainsmokers' EDM track "Don't Let Me Down", which would move on to become her biggest hit of all time, reaching #3 on the Hot 100 and far outpeaking "Hide Away". Her debut studio album Sit Still, Look Pretty was released on October 7, 2016. In 2017, she left Artbeatz and RED for Interscope Records.