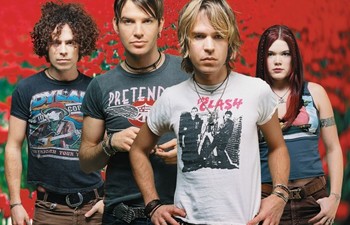 The Dandy Warhols are a four-piece band hailing from Portland, Oregon. Formed in 1994, the band consists of Courtney Taylor-Taylor, Peter Holmstrom, Zia McCabe and Brent DeBoer. They've run the gamut from psychedelic rock to power pop, with the occasional rockabilly tune thrown in.

They are one of the two featured bands in the documentary Dig!, which examines the band's love/hate relationship with The Brian Jonestown Massacre. The film depicts the Dandy Warhols as the stable, happy and successful shadow of the mad artists in BJM. Taylor-Taylor provides the narration.

The band currently consists of (founding members in bold):

Tropes associated with the Dandy Warhols: