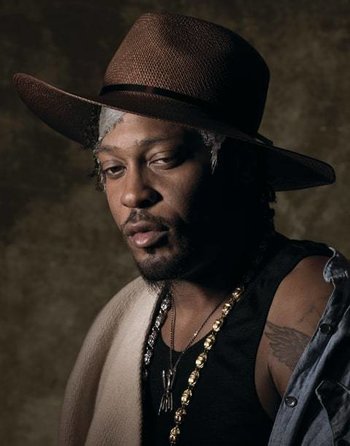 The Black Messiah
Fuck the slice, we want the pie
Why ask why 'til we fry
Watch us all stand in line
For a slice of the devil's pie
- "Devil's Pie"
Advertisement:

Born in 1974, he began teaching himself piano as a young child, and at age 18 won the amateur talent competition at Harlem's Apollo Theater for three consecutive weeks. He would soon drop out of high school, and around this period briefly join a hip-hop group called I.D.U. (Intelligent, Deadly but Unique). His first major success, however, came in 1994 as the co-writer and co-producer of the Jason's Lyric soundtrack single "U Will Know", an R&B hit that would by recorded by the R&B group, B.M.U. (Black Men United).

This would all become preamble to the release of his debut record, Brown Sugar, released in 1995. The album's earthy, early Al Green-esque passion and jazzy cadence caught on with R&B fans looking for an alternative to the slicker, more hip-hop influenced sounds dominating the urban contemporary landscape, and the album went platinum by the next year. By October 1996, the majority of a September 1995 performance, featuring major studio collaborator and later inomarata, Angie Stone, on background vocals, was released in Japan as Live at the Jazz Cafe, London.

Following the success of Brown Sugar and a two-year touring cycle, D'Angelo took a near five-year sabbatical from solo work, later explaining that he chose to spend that time only recording cover versions of songs for various movie soundtracks (i.e. "She's Always In My Hair" for Scream 2, "Girl You Need a Change of Mind" for Get On The Bus, "Your Precious Love" with Erykah Badu for High School High, etc.). He also made an appearance on Lauryn Hill's The Miseducation of Lauryn Hill.

After all that intermittent activity and a series of delays, his second record, Voodoo, would be released in 2000. Its critical acclaim and commercial success was largely spearheaded by its single "Untitled (How Does It Feel)", as well as its infamous long take music video consisting of nothing but a camera moving up and down D'Angelo's glistening, appearing-to-be-nude body. The single and video did invaluable work raising the profile of both him and the record in mainstream media, additionally turning him into a sex icon for a younger generation of fans. It would also earn him a Grammy Award for Best Male R&B Vocal, and the album itself would earn him a second in the Best R&B Album.

Unfortunately, the good tidings would not last long. Discontent with his new status as a sex symbol and disillusioned with his newfound popularity, D'Angelo would soon disappear from the public eye yet again after his tour for Voodoo, developing a drinking habit due to the suicide of a close friend. Despite this, D'Angelo collaborated with some R&B and hip-hop artists during this period between albums, appearing on albums by J Dilla, Q-Tip and Common among others. D'Angelo's next solo record, however, would be extensively delayed, with production for a full-length follow-up to Voodoo going on and off mostly by himself during 2002.

After a car accident and a court case for drug charges in 2005, no more information would be cropped up about his follow-up to until 2007, when Questlove leaked a track from the record (at this time with the pre-release title of James River) titled "Really Love". A potential release for the album sometime in 2009 failed to materialize, but around 2012, D'Angelo performed a number of European tour dates and scattered festivals, premiering new songs from the record. In 2014, he would finally release his eagerly awaited third studio album, Black Messiah, to greater critical acclaim and commercial success than his previous records, as well as a Grammy for Best R&B Album, while lead single "Really Love" took Best R&B Song.

After this, D'Angelo toured briefly and wasn't heard from again until the October 2018 release of the song "Unshaken" for the video game Red Dead Redemption II's soundtrack. Currently, D'Angelo hosts Feverish Fantazmagoriaa, a radio show on Sonos Radio.