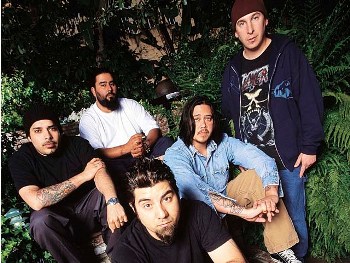 Deftones is a Genre-Busting metal band formed in 1988 in Sacramento, California. The band has been comprised largely of the same core members for its entire career, with the exception of bassist Chi Cheng, who had to be replaced after being seriously injured in a car accident in late 2008 which he unfortunately never fully recovered from, remaining in a semi-conscious state up until his death on April 13, 2013.

The band's distinctive musical style is often disputed by their fans, and trying to categorize them will result in a lot of backlash. Specifically, a lot of the band's music has a lot in common with nu metal (particularly their early work), including the vocalization (a mix of screams, whispers, spoken word, melodic singing and occasional rapping), the use of turntables for additional instrumentation and sound development, plus syncopated, riff-based instrumentation (although there is a lot of experimentation and complexity in many of their songs).

However, fans argue that Deftones isn't really nu metal because of the lack of angst, or claim that they're "too good" to be a nu metal band (though most will agree that Adrenaline fits, or at least "Engine No. 9"). Adding to the dispute is the band's diverse influences and mix of an abundance of styles, including alternative metal, alternative rock, dream pop, shoegazing, grunge, hardcore punk, rap, new wave, emo, progressive rock and rap metal. Their music could fall into any number of categorizations as a result.

The band's magnum opus is generally considered to be either White Pony or Diamond Eyes by fans and Koi No Yokan by critics. The band is generally considered an influence on nu metal, even with the debate over whether or not they belong to the genre, and many bands in the genre have cited them as an influence, including Trope Maker Korn and Trope Codifier Limp Bizkit.

Through... the haunted trope in your eyes:

The album version of "Elite" already follows this trope, but the band likes to take it to the next level in concerts by having Chino start the song when you least expect it.

The album version of "Elite" already follows this trope, but the band likes to take it to the next level in concerts by having Chino start the song when you least expect it.