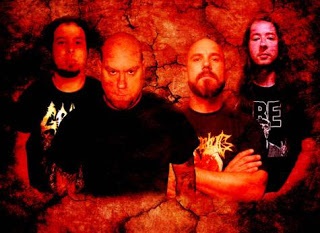 Deeds of Flesh are an American Brutal Death Metal band hailing from California. They were formed in 1993 by Jacoby Kingston, Erik Lindmark and Joey Heaslet , although Lindmark was the only member left still in the band during their activity. They founded their own label, Unique Leader Records, which has since become home to a number of other death metal bands from around the world.

They had also toured with various others bands such as Cannibal Corpse, Severe Torture and Disavowed.

In 2012, Lindmark was diagnosed with a tendinitis in his arm, leaving him only to do guitar duties in the studio. He passed away on November 29, 2018 after a brief but serious illness, and the band's current status was unknown until September 2020, when a new lineup premiered a new single and announced the album Nucleus for a December release.

Tropes displayed by Deeds Of Flesh: