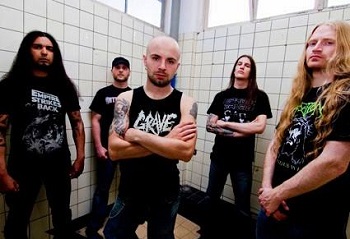 Severe Torture are a Dutch Brutal Death Metal band. The band was formed in 1997 by Thijs van Laarhoven on guitar, Seth van de Loo on drums, Erik de Windt on vocals, Jelle on guitar and Patrick Boleij on bass guitar. This lineup recorded a five song demo tape called Baptized in Virginal Liquid, produced by Vincent Dijkers, (Sinister, Houwitser), in 1998. De Windt was replaced by Dennis Schreurs, and with this new line-up the band recorded a two song demo sent out to record labels. After receiving positive reactions, the band went on to play a gig with Immolation; Jelle left the group soon afterwards.

The band continued with four members, appearing at the No Mercy 2000 festival in Tilburg, and soon after embarked on their first tour, one of which was with Pyaemia. Shortly after, they recorded their debut album, Feasting on Blood, and to promote the album, they went on a European tour with various other bands to promote their debut. Soon, the sophomore effort, Misanthropic Carnage was released under Hammerheart records, formerly known as The Plague Records. They were also involved in the Ohio Death Feast, along with Deeds of Flesh and Exhumed.

It was in 2003 that Marvin Vriesde of Dew-Scented fame would be session guitars before joining full time, contributing to Fall of the Despised and Sworn Vengeance under Earache Records and Slaughtered under Season Of Mist. Currently, they are working on a followup to Slaughtered, with no other updates in sight.