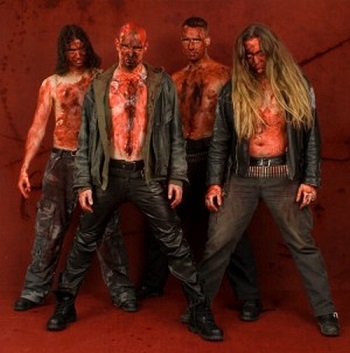 Debauchery is a Death Metal band from Stuttgart, Germany. Founded in 2000 as Maggotcunt before changing their name in 2002, Debauchery was initially formed by current vocalist, guitarist, and bassist Thomas Gurrath and former drummer Dani.

They all are Khorne worshippers. Except they do not spill blood in his name... as far as we know.note They don't shed it by killing people, (OBVIOUSLY) but they definitely shed blood (or something like blood) in their music videos and live shows.

The band consists of: