Music / The Furnaces of Palingenesia 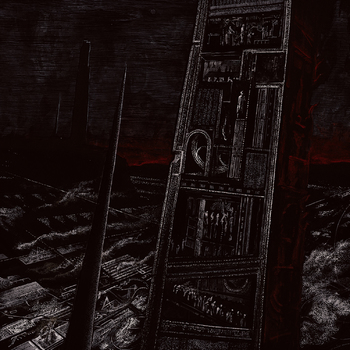 "Walking over the precipice in communion is easier than to acknowledge yourself as the cripple you truly are."

"This world contains neither meaning nor justice!"

The Furnaces of Palingenesia

is the seventh studio album by French avant-garde Black Metal band Deathspell Omega, and the band's 14th release overall. Like all Deathspell Omega albums since Si monumentum requires, circumspice, it is a Concept Album. However, it is lyrically a major departure from the band's previous releases. Trading in the dense theological poetry of their earlier work, the album instead presents itself as a tract from a secret political faction calling itself "The Order". Over the course of the album, the narrator unfurls a vision of a terrifying dystopian world in which the Order holds absolute dominance over all aspects of life, culminating in the implied destruction of civilization.

Musically, the album also represents something of a departure from their previous work, having been recorded live in a studio on analogue gear, and with somewhat more dynamic mastering. The band indicated in an interview after the release of the album that this shift in approach is a consequence of their shift in subject matter. They even considered performing it before live audiences, but the schedules of some of their members prohibited it - quite a surprise from an Anonymous Band.

The album proved controversial on its release, sparking fierce debate as to how sincere its lyrics were. Some reviewers saw it as a satire of fascism and totalitarianism, noting the self-aware irony throughout the lyrics, as well as the narrator's attitude as a Card-Carrying Villain. Others saw it as an outright NSBM album, noting the extensive connections assumed vocalist Mikko Aspa has with far-right politics. Ultimately, the band clarified their intentions in an interview with Bardo Methodology

, confirming their stance as firmly anti-authoritarian and noting their political disagreements with Aspa, who evidently had no hand in the writing of the album.note The band has still not explicitly confirmed any details of its membership, but the Bardo Methodology interview is widely interpreted to be implicit acknowledgement of Aspa's participation in the band, since they allude to the controversy surrounding it.

You cannot even find the tropes...:

You cannot even find the ruins...