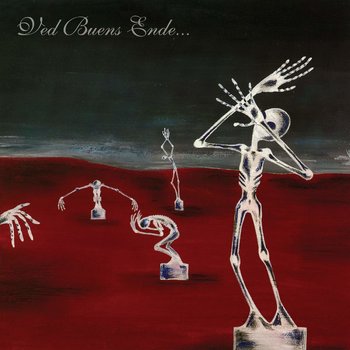 Ved Buens Ende... (Norwegian for "at the end of the bow", referring to the mythological rainbow Bifröst; also seen as Ved Buens Ende..... and simply Ved Buens Ende on various album covers) is a Black Metal formation from Oslo, Norway. They are notoriously the Trope Makers for the avant-garde branch of black metal, exploring the genre years before bands such as Deathspell Omega, Blut aus Nord, and Dødheimsgard.

Formed in 1994, Ved Buens Ende... released the Those Who Caress the Pale demo the same year and a full-length album Written in Waters in 1995, which became highly acclaimed and influential. The band split up in 1997 and reunited twice; first in 2006 with promise of new material only to split up again the following year without any new releases; then in 2019, still currently functioning.

"...went away with my fathers, to gather the tropes."

"Witches painted me,
Like the mysteries created me...
Like where the poets breathe,
I were woven into blasphemies."