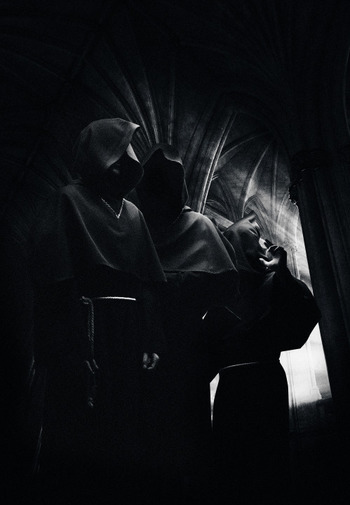 Blut aus Nord (Eng: Blood from (the) North) (formed in 1993 under the name Vlad) is a French Black Metal outfit from Lower Normandy, and is one of the most popular French black metal bands alongside Deathspell Omega, Peste Noire, and Alcest. Initially playing a melodic/ambient form of black metal for their first two releases, the band later added Industrial Metal and Progressive Metal elements in the vein of Godflesh starting with their 2001 release The Mystical Beast of Rebellion. Though they largely stick to this new sound, they have released two sequel albums to their sophomore effort Memoria vetusta I: Fathers of an Icy Age, with a fourth release in the series planned (the band originally planned a 2018 release date, but there seems to have been a Schedule Slip). They (or rather, guitarist and vocalist Vindsval) have also completed a trilogy of albums (the 777 albums) that all share thematic elements and track numbering while also adding Avant-Garde Metal elements to their sound.

Like their fellow countrymen Deathspell Omega, their music is often harsh and dissonant, with noisy guitars, chaotic drumming, heavy use of Drone of Dread and Hell Is That Noise, and an overall dark, almost alien feel. However, their work also frequently features (relatively) mellow, ambient passages, which are more pronounced in their early work and their throwbacks. Additionally, while both bands take substantial amounts of influence from Black Metal, Progressive Rock, and Avant-garde Music, Deathspell's work tends also to be more influenced by modern classical music, while Blut aus Nord draws more influence from Industrial Metal bands.

While their name and some of their song titles might suggest nationalistic leanings, the band have disavowed nationalism and proclaimed their kinship with "environmentalist black metal" bands such as Wolves in the Throne Room and, in fact, Memoria vetusta I (the only album of theirs for which lyrics have been released) has a story centring around revenge for an act of attempted genocide.

They have an official Bandcamp site

where you can buy digital downloads of most of their music or stream it for free. (For whatever reason, What Once Was... Liber II, Decorporation..., Dissociated Human Junction, and the bonus disc of The Mystical Beast of Rebellion aren't up there).