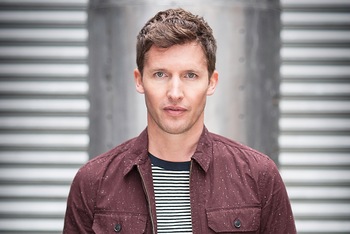 "Cockney rhyming slang for the good stuff; Proof that one song is all you need"
—James Blunt, in his Twitter

James Hillier Blount (born 22 February 1974), better known by his stage name James Blunt, is a British singer-songwriter who rose to fame in 2004 with the megahit "You're Beautiful". It got played to death on the radio, to the point that a lot of people were heartily sick of the sound of his voice. Coupled with other artists being shunted off festival bills in favour of Blunt due to his newfound prominence, there was a huge backlash amongst the British public under the rather blunt catchphrase "James Blunt is a c**t".

Prior to his career in music, he served in the British Army, being deployed to Kosovo during the The Yugoslav Wars.

Blunt however was unfazed by this and due to his solid work ethic, support for charities and continuing to release popular albums and singles, the hate has mostly faded from the public consciousness and Blunt has gone on to sell over twenty million albums. In 2016 he semi-humorously passed on his "is a c**t" moniker to a controversial UK politician.