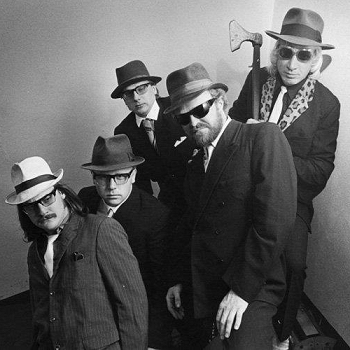 Vazelina Bilopphøggers (Vazelina Auto Wreckers) is a Norwegian pop and rock group, specializing in songs that borrow elements and chord progressions from classic songs (sometimes covering the songs outright), and crafting a mostly-original composition by adding bizarre humorous lyrics, which more often than not have little to no relation to a song's original lyrical content.

Their most famous and iconic lineup consisted of Viggo Sandvik (vocals), Eldar Vågan (guitarist and principal songwriter), Rune Endal (bass), Jan Einar Johnsen (organ, saxophone, backing vocals), and Arnulf Paulsen (drums), affectionately known as "Høggern" ("The Wrecker/Chopper"). The group was named after Paulsen's actual auto wrecking yard, which was in turn, according to legend, named after a Hispanic translation of the title of the film Grease.

They are one of Norway's most beloved and prolific acts, having more or less continually performed for thirty years and counting, and have branched out into television, comics, video games, and more.