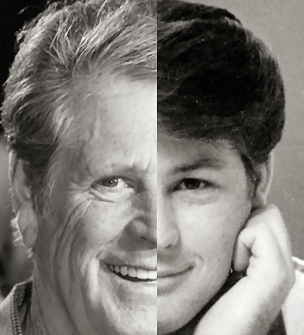 Adult / Child
Influences:
"Hi, this is Brian Wilson of The Beach Boys, and I don't know who knows me, but I hope they like my music."
— "Beach Boys: Brian Wilson explains

Brian Douglas Wilson (born June 20, 1942) is an American Singer-Songwriter, musician, arranger, and Record Producer, best known as the principal songwriter for The Beach Boys, and the eldest brother of Dennis Wilson and Carl Wilson.

A musical prodigy from birth, he ironically suffered from complete deafness in one ear. note Several theories exist as to how that happened; the most popular one being that it resulted from repeated beatings by his domineering father Murry. During The '60s, as his group enjoyed increasing success and popularity, Brian withdrew from touring to focus entirely on writing and producing. Brian's increased focus on introspective existential angst birthed Pet Sounds, regarded as one of the best pop albums of all time. His follow-up project, a "teenage symphony to God" entitled SMiLE, was intended to mark The Beach Boys' ascendancy to the pinnacle of popular music.

It was not to be. For reasons too numerous to list here, SMiLE was shelved, and Brian's musical productivity slowed considerably as he withdrew from the world. Following a diagnosis for schizoaffective disorder (a condition that combines symptoms of schizophrenia and mood disorders like bipolar) which he further exacerbated with drug abuse, Brian holed himself up in his house for a number of years, surfacing only occasionally to aid the 'Boys. With over a decade of "help" from controversial therapist Eugene Landynote who was secretly using Brian to obtain fame and fortune by leeching off his name, Brian was able to more or less restore his health and some level of musical productivity, releasing a self-titled solo album in 1988. A follow-up called Sweet Insanity was completed, but never released.

After being legally separated from Landy in 1991, Brian was able to tap into a level of productivity not seen for three decades; to everyone's surprise, he conquered his still-lingering stage fright to perform live. In 2004, Brian resurrected SMiLE for a series of live shows; the unanimous praise resulted in a solo studio version of the album, which also resulted in his first Grammy. Since then, he has released a steady stream of solo recordings, and even rejoined with The Beach Boys on a number of occasions, finally releasing the original SMiLE sessions in 2011, reaffirming his belief in his masterpiece amongst lavish critical praise. Truly the story of a man who learned to "smile!"