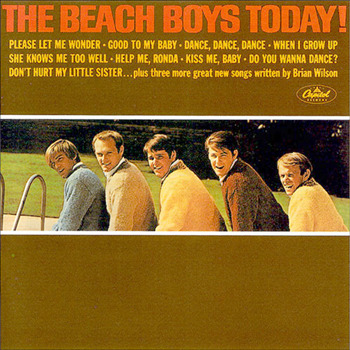 Although you can't tell from the way the picture is framed, the boys are sitting on a diving board.
Advertisement:

This album marks a turning point for the band, as it comes right after Brian Wilson's decision to quit touring following a nervous breakdown on a plane in December 1964. Brian began to use marijuana around the same time, and this had a profound impact on his songwriting. While the first side of Today! consists of pop-rock songs not unlike their earlier material, the second half shows off a more mature, sophisticated side of the band, and is generally considered to be a direct precursor to the material on Pet Sounds.

Also notable is the Troubled Production behind the song "Help Me, Ronda". Murry Wilson (the father of Brian and his brothers, and the band's former manager) drunkenly crashed the studio while the vocals for the song were being laid down, and repeatedly interrupted and criticized the band. This pushed Brian over the edge, and he started screaming and confronting his father. Naturally, the entire incident was captured on tape, and is widely bootlegged to this day. Needless to say, the result was a mediocre song, but a few months later it was re-recorded with a different arrangement as "Help Me, Rhonda", and subsequently became a major hit single. That version appears on the group's next album, Summer Days (And Summer Nights!!).

Do You Wanna Trope?