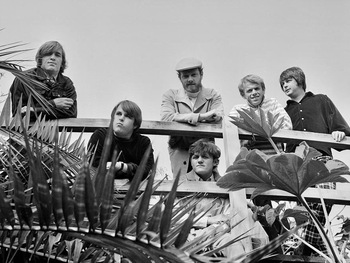 America's pre-eminent pop/rock band of The '60s, The Beach Boys are often regarded as the nearest U.S. rival to The Beatles in that decade, both commercially and artistically. And contrary to what one might expect, they have one of the longest, oddest, and most fascinating stories of any band in rock history.

Murry Wilson, a Hawthorne, California factory foreman who also dabbled in songwriting, had three sons: Brian, Carl and Dennis. The Wilson boys sang together throughout their childhood, often joined by their cousin Mike Love, the son of Murry's sister. They occasionally played at school functions under various names such as Kenny and the Cadets, Carl and the Passions (later the title of one of their albums), and the Pendletones (after the Pendleton flannel shirts popular among SoCal surfers).

They got their actual start basically out of the Wilson family house, over Labor Day weekend in 1961; Murry and his wife Audree went on a trip to Mexico, and while they were gone, the band recorded their first song, "Surfin'" (included on the album Surfin' Safari in 1962), in the music room (converted from the garage). After that hit the local radio and was a small national hit, they signed to Capitol Records in 1962 and quickly climbed the charts as the premier Surf Rock band in the nation, playing a big role in popularizing the Southern California culture throughout the country. The band's well-honed harmonies made them stand out musically, while Brian established himself as a songwriter who specialized in memorable, imaginative melodies, and Murry, a tenacious man with a knack for promotion, acted as their manager.

However, by the end of 1964 the stress of composing, producing, and performing and the competition from The Beatles led Brian to suffer a nervous breakdown and retire from touring. At around the same time, Murry's domineering personality and questionable business sense started to get out of control, so the band (i.e. his own sons) fired him. While the rest of the group toured (with first Glen Campbell and then Bruce Johnston taking Brian's place), Brian stayed at home writing music and utilizing the studio talents of The Wrecking Crew, leading to more advanced-sounding albums such as The Beach Boys Today! and Summer Days (And Summer Nights!!).

This eventually led to what some critics consider the greatest pop/rock album of all time: Pet Sounds, which brought a whole new depth to popular music, with advanced production techniques, complex instrumental arrangements, and powerful lyrics on such subjects as loneliness, youthful longing, self-isolation, and the loss of innocence. Paul McCartney has said that Pet Sounds was a major influence on The Beatles' own landmark album Sgt. Pepper's Lonely Hearts Club Band. (Not coincidentally, if a critic doesn't call Pet Sounds the greatest pop/rock album in history, they likely think it's Sgt. Pepper).

From there, however, the story becomes a long, tragic string of misfortunes. After Pet Sounds was released, Brian Wilson intended to top it with a revolutionary new album called SMiLE. However, a series of increasingly destructive circumstancesnote pressure from Capitol to actually deliver the album, Brian's ailing psyche and his escalating drug abuse, a royalty lawsuit, Brian's confidence being destroyed by the relative commercial failure of "Heroes and Villains", and him becoming convinced that the Beach Boys could never top the Beatles after listening to Sgt. Pepper's Lonely Hearts Club Band led to the album's cancellation in 1967. The band instead released Smiley Smile, which combined what the rest of the band felt were the stronger Smile tracks with some new, supposedly more commercial material (as opposed to the "weirder" Smile songs). That album was, as Carl Wilson later described it, "a bunt instead of a grand slam", and the band's popularity plummeted in the US (although they remained huge elsewhere, especially Europe).

During this time, Brian receded into the background, pushing the other members to begin composing songs in his absence. It was at this point that the band began to splinter into two different creative camps, with Carl and Dennis on one side, advocating more experimental music, and Mike and Al on the other, preferring to stick with the formula. Brian was the swing vote. Things eventually would come to a head when Mike obtained Brian's proxy vote, allowing him to outvote Carl and Dennis in all band-related matters. Meanwhile, in 1969 Murry Wilson, without the band's authorization, sold their entire song catalogue for the paltry, extremely undervalued sum of $750,000;note almost $5.2 million in 2018 money for a catalogue which is estimated to be worth at least $75 million today Brian has since suggested that Murry forged his signature on the sales documents. Despite a run of artistically brilliant albums right up to their 1973 album Holland, and line-up changes (Bruce Johnston leaving in 1972, with Blondie Chaplin and Ricky Fataar of the Flames joining for a few years), they were considered passé in their home country. Brian was still in rough mental shape, and Murry's death from a heart attack at age 55 in 1973 was another blow to the group's morale.

Things started to look up in 1974 when Capitol Records released a Greatest Hits Album, Endless Summer, which not only eventually went triple platinum and restored the band's commercial fares in the US, but also propelled them back into cultural relevance. They decided to start recording again and attempted to lure Brian Wilson back into the studio with them. During this time, Brian was being subjected to therapy under the control of Dr. Eugene Landy. Through his unconventional therapy, he was able to make Brian slightly healthier and willing to work with the group again. He produced two albums, 15 Big Ones and Love You under this deal, and also re-appeared on stage with the band. But looking back, it's clear that Brian wasn't really well enough to do that sort of thing again, and he started slipping back into his former habits. Mike Love took over leadership of the band at this point, which many regard as the point at which the band started Jumping the Shark, though he wasn't really in charge in the studio until the late-1980s. By the end of 1978, Bruce Johnston was back in the fold permanently.

During the times Brian Wilson was for the most part out of the picture, the rest of the band generally wrote songs in his place. They each created very memorable, beautiful music, with Dennis Wilson releasing his solo album, Pacific Ocean Blue in 1977, which is now generally regarded as the best solo album to be released by a member of The Beach Boys. However, Dennis was also prone to alcoholism and self-destructive behavior, and he died in 1983, having drowned while diving into the water at the Marina del Rey to search for personal effects he had thrown into the water years before. At President Ronald Reagan's request, he became one of few civilians to be given a burial at sea.

The Beach Boys basically coasted along for the rest of the '80s and '90s, their only major blip on the radar being the 1988 hit "Kokomo". As Brian Wilson was at his worst (weighing over 325 pounds), he was subjected to Landy again in 1982, and for the next 10 years, Landy would not only treat Brian's illness in extreme and questionable ways, but also fully integrate himself into his business and musical affairs, isolate Brian from his friends and family, and leech thousands of dollars off of him for years. A court case in 1991 was successful in separating Brian from Landy's negative influence. He recovered substantially, and in 1996, he was persuaded to briefly rejoin The Beach Boys as a producer. Though things started off well with brilliant songs like "Soul Searchin'" and "You're Still A Mystery", at the end they decided to create the ill-conceived Stars and Stripes Vol. 1, a patchy album of Beach Boys covers sung by country artists. Any chance of a reunion that actually counted for something was cut short by Carl Wilson's 1998 death from lung cancer.

For much of the rest of the time, the surviving Beach Boys splintered into three units: The Beach Boys, which is essentially Mike Love & Bruce Johnston, who tour with the official sanction of Brother Records Inc.; Brian Wilson, who tours with a band based around LA Power Pop combo Wondermints and continues to record excellent music with them, including, at long last, his dream project SMiLE in 2004; and Al Jardine, who left the splintered remains of the original group after Carl's death and now tours with his son and an assortment of former Beach Boys sidemen known as Al Jardine's Endless Summer Band.

In 2012, on the 50th anniversary of the band's first album, Surfin' Safari, the unexpected happened: a full reunion of the surviving Beach Boys

, featuring Mike Love, Brian Wilson, Bruce Johnston, Al Jardine and David Marks, took place for a 50th Anniversary world tour and the recording of a new studio album, That's Why God Made the Radio, co-written by Love and produced by a rejuvenated Brian Wilson. At the end of the tour, Brian, Al, Mike, Bruce and David went their separate ways again, with Al and David (as well as Blondie Chaplin) contributing to Brian's upcoming album and his recent solo tours.

Numerous artists have cited them as a major influence, including Animal Collective, The Ramones, Alice Cooper, Elton John, Weezer, The Bee Gees, Daft Punk, the Flaming Lips, basically the entire indie rock genre, and even The Beatles themselves.