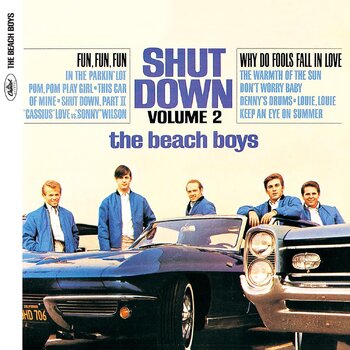 Al Jardine (pictured on the far-left) has now reintegrated the band.
Advertisement:

Shut Down Volume 2 is the fifth album in The Beach Boys' discography. This LP would be the first release of the band after rhythm guitarist David Marks left the band and founding member Al Jardine came back to fill in David's role.

This album is home to two major hits in the band's career: "Fun, Fun, Fun" and "Don't Worry Baby". Many people were confused by the album's title (Shut Down Volume 1 is the name of a compilation of car songs released by Capitol records) but it didn't stop it from reaching the 13th place in the Billboard.

And she has fun fun fun 'til her father tropes the T-Bird away: