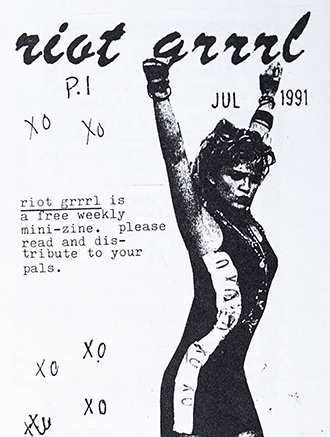 The movement coalesced around the Seattle and Olympia metropolitan areas in Washington, largely due to its extensive DIY infrastructure (and The Evergreen State College in Olympia), with its roots in the unorganised collective outrage drawn by the Anita Hill judiciary hearings

in 1991. Its name comes apocryphally from a letter Bratmobile member Jen Smith wrote to Allison Wolfe, stating We need to start a girl riot. The phrase itself was the name of a magazine started by Wolfe, Molly Neuman, and Bikini Kill members Kathleen Hanna and Tobi Vail.

Riot grrrl bands largely drew their inspiration from female-fronted punk and alternative musicians of the past, such as The Runaways, The Raincoats, X-Ray Spex, The Slits, X, Patti Smith, The Plasmatics, Lydia Lunch, Crass, and Kim Gordon. Their music, much like the grunge that was becoming popular around the same time, was based around Three Chords and the Truth, eschewing complex musicianship in favour of raw production, aggressive sounds, and lyrics dealing largely with politics, society, and feminism. The movement relied heavily on promotional means pioneered by punk rock bands in the past, such as publishing various magazines, photocopied handbills, collage-based booklets, and cassette culture. Said magazines had a definite political bent, featuring commentary and experiences on various important issues such as sexism, mental illness, body image and eating disorders, sexual abuse, racism, rape, discrimination, stalking, domestic violence, incest, and homosexuality.

While many bands in the genre were all-female, some bands (such as Bikini Kill, one of the genre's pioneers, and Huggy Bear) also had male members.

The mainstream music world largely misinterpreted the Riot Grrrl movement's political stances and sensibilities, making them out to be Straw Feminist misandrists and generally not caring enough to do the research. They also lumped various female-fronted Alternative Rock bands with the movement no matter how tenuous the similarities were, such as Hole, The Breeders, The Gits, Elastica, 7 Year Bitch, Babes in Toyland, and even No Doubt. The sheer lack of care or research became so excessive that Bikini Kill entered a media blackout around 1993. Kathleen Hanna encouraged all the bands to do the same, but not many followed through.

The movement splintered by the mid '90s, disillusioned with its misrepresentation in the mainstream music press and feeling that its radical politics had been subverted or co-opted as less challenging "girl power" by various female-fronted pop bands like the Spice Girls and the Dixie Chicks.

A few bands have a disputed or tenuous connection with Riot Grrrl. L7 probably has the strongest claim to association with the movement, due to organising the Rock for Choice benefit concert. Other female punk bands that are political but didn't identify with the movement, no matter how much uninformed music journalists wanted them to, included: 7 Year Bitch, Babes in Toyland, Jack Off Jill, Spitboy, and Adickdid. More recently, the Russian band/collective Pussy Riot

has been compared to the "classic" Riot Grrrl bands in some media, chiefly due to their outspoken activism against Vladimir Putin.

Also, Hole have absolutely nothing to do with the genre. Courtney Love hated the scene, accusing it of misandry and claiming the Evergreen State College groups cared more about dogma than encouraging free thinking, and mocked the riot grrrls in the Hole song "Rock Star" (originally named "Olympia"). Yet, some people still tried to claim that Hole was a riot grrrl band. Go figure.