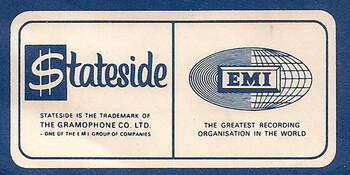 , an imprint of EMI now owned by Warner Music Group, is a label with a long, sometimes confusing history. It's best known for the original British release of American hits such as Freddie Cannon's "Palisades Park", Herb Alpert's "The Lonely Bull", and several records by Frankie Valli and the Four Seasons and various Soul artists.

It all started relatively simply. In the early 1960s The Rank Organisation closed their Top Rank Records subsidiary, which had been distributed by EMI, and "The Greatest Recording Organisation in the World" wanted a replacement. At the same time, EMI execs saw the success that Decca's London imprint and Pye International were having by licensing hits from independent American labels for the European market. EMI's existing labels His Master's Voice, Columbia and Parlophone had all issued records that originated with small US indies, but EMI had never had a label specializing in that kind of release. Therefore, EMI created the Stateside label in 1962, with former Top Rank head Fred Oxon as its chief executive. (However, HMV and Columbia continued their deals with ABC-Paramount and Epic, respectively.)

Stateside became the European licensee for many small-to-middling American labels, including 20th Century Fox, Scepter, Swan, and Vee Jay, the latter two of which got US rights to early Beatles releases thanks to their relationships with EMI (and Capitol not realizing the group's potential at first). Some other Stateside-associated labels, such as A&M, Bell and Motown, became successful enough to gain their own label identities overseas, which was a problem for the imprint over the years. However, Stateside got a boost in 1967, when HMV was converted to a Classical Music label in the UK; Stateside wound up inheriting the ABC roster, as well as ABC's sublabel Dunhill when their deal with RCA ended in 1970. Stateside also released The Beach Boys' first two Reprise albums (Sunflower and Surf's Up (1971)) in England, as well as a Dennis Wilson solo single that never made it to America, probably due to the band's international contract with EMI not having expired yet. However, in 1973 a corporate reorganization resulted in EMI shutting down Stateside in England and replacing it with a new label, EMI International.

And that's the story of the original incarnation of Stateside Records in England. However, EMI used the trademark in pretty much much every nation where it had an operation except the US and Canada, and Stateside continued in many countries after the end of the original British label. This is where things get confusing. You'd assume that since the label was named Stateside, its roster would consist only of American artists, never any Brits. But you've already guessed what comes next, right? Welcome to the wacky world of record collecting!

Probably due to trademark and/or copyright reasons, Stateside wound up releasing several UK artists outside the British Isles, due to licensing deals with English labels such as Immediate, Pye, and even other EMI imprints like Harvest and Regal Zonophone. From The Kinks in India to The Small Faces in Singapore, from Deep Purple in Turkey to Procol Harum in France, Stateside marketed a surprising amount of British music in various countries.

However, Stateside is best known for the variety of American Blues and Soul music it issued, much of it coming from legends such as Ray Charles, John Lee Hooker and Stevie Wonder. Stateside became a well-respected name among the Northern Soul subculture, so much so that in The '80s EMI revived it as an R&B-oriented reissue label. When EMI went under in 2012, the Stateside trademark was one of the assets acquired by Warner Music Group, which revived the label in 2017 as a Parlophone subsidiary. This latest version of Stateside has reissued blues, soul and Jazz from the Warner catalogue, often in cooperation with WMG's other reissue label Rhino, including artists such as John Coltrane, Aretha Franklin and Nina Simone.