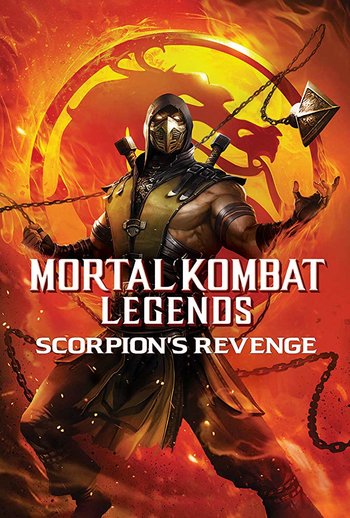 Life is cruel, Satoshi. It doesn't care where you are from, what god you pray to. It is. So, you must face it head-on. See the scorpion? No matter how many enemies, it continues on. It is strong, yes; it is fast. But do you know why the scorpion is feared? Its will.
— Hanzo Hasashi
Advertisement:

"Once in a generation, the aging warlock Shang Tsung hosts an interdimensional martial arts tournament where the victor will challenge him for the fate of their homeworld. But deep below in the depths of the Netherrealm, the sorcerer Quan Chi makes an offer to a troubled soul who lost both his family and clan from genocide by restoring him as a specter bent on revenge, Scorpion."

The movie stars Joel McHale as Johnny Cage, Jennifer Carpenter as Sonya Blade, and Patrick Seitz as Scorpion, among many others.

trailer and the red band

A sequel, Mortal Kombat Legends: Battle of the Realms, was released on August 31, 2021.

Tropes for the movie include: