Blade on a Rope 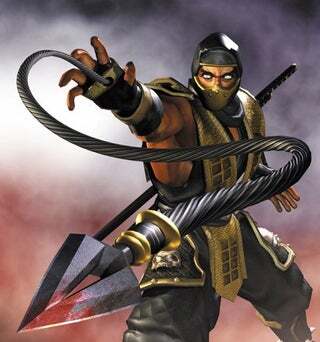 GET OVER HERE!
Advertisement:

One of the more interesting weapons seen in media is a rope, chain, string, wire, etc with a bladed weapon attached to it. This blade is usually a knife although other types such as hooks, claws, darts and sickles are also common. These types of weapons are incredibly difficult to master in real life so a character wielding such a weapon is bound to be very skilled with it in order to be a threat. They also tend to look damn cool.

The weapon can sometimes invoke the image of a striking snake or a scorpion's stinger, hence why it's common use among villains and antiheroes.

In video games, such a weapon is often used either to close the distance from an opponent (by pulling yourself to them or pulling them closer to you) or as a movement/traversal option like a grappling hook.

Compare with Epic Flail, where a heavy object is attached on a rope or chain. Not to be confused with Whip Sword or Razor Floss. A kusarigama is likely to be included in Stock Ninja Weaponry. Very often this trope overlaps with Variable-Length Chain.