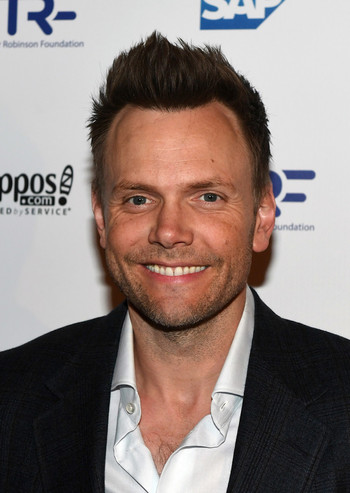 Joel Edward McHale (born November 20, 1971) is an American actor, writer, comedian, and producer. He is best known for his Deadpan Snarker persona in stand-up, acting, and hosting gigs.

Prior to his breakthrough roles in acting, he played Collegiate American Football at the University of Washington and was perhaps best known as the host of E!'s long-running pop culture clip show The Soup, which he also served as a writer on. After eleven years, the series ended in 2015.

Outside of The Soup and Community, he's appeared in the horror film Deliver Us from Evil, the revival season of The X-Files, and CBS' The Great Indoors. In 2018 he hosted The Joel McHale Show with Joel McHale, a short-lived weekly topical talk/sketch series on Netflix.

Outside of acting, he's a well-known gourmand, often using his various social media accounts to promote chefs and restaurants who've captured his fancy over the years.

Wilbur Wilson teaches his son Cecil his secret to playing a spy-hunter on television.

Wilbur Wilson teaches his son Cecil his secret to playing a spy-hunter on television.