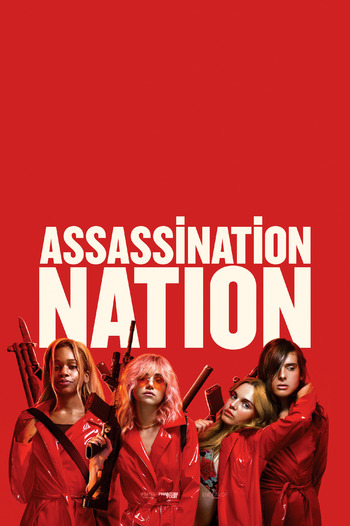 Assassination Nation is a 2018 exploitation thriller written and directed by Sam Levinson.

After the sleepy American town of Salem is rocked by a series of online hacks and leaks that ruin the lives of its subjects, free-thinking high schooler Lily Colson (Odessa Young) — herself one of the many victims — gets pinned with the blame.

It only goes downhill from there.

With only her friends Bex, Em, and Sarah (Hari Nef, Gabrielle "ABRA" Mirville, and Suki Waterhouse) by her side, it's up to Lily to fight off a horde of armed misogynists who want her dead. Also in the film are Bill Skarsgård as Lily's boyfriend Mark, Joel McHale as Lily's "daddy" Nick, and Bella Thorne as blue-haired cheerleader Reagan.