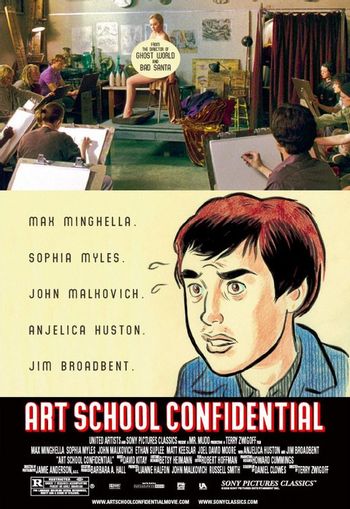 Art School Confidential began life as a four-page black-and-white comic by Daniel Clowes for his Anthology Comic, Eightball. It became very popular first among Clowes' friends and then with other former college art students. It inspired a 2006 film of the same name directed by Terry Zwigoff (who'd previously adapted Clowes's Ghost World for the screen).

In the movie, Jerome (Max Minghella) has idolized Picasso from a very young age and wants to be a famous artist (possibly just so he can meet girls). When he gets to Strathmore College, he very becomes very disappointed with the state of affairs, surrounded by incomprehensible art, crazy students, an even crazier alumni, and teachers who really don't care. He becomes increasingly bitter and alienates everyone around him.