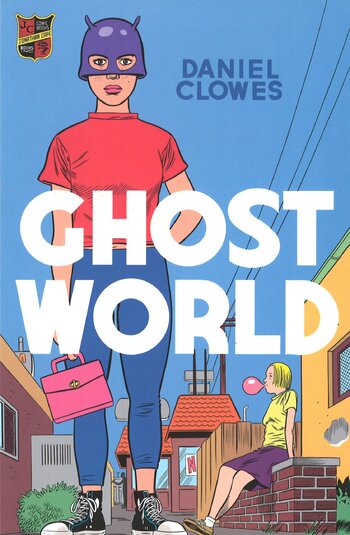 Ghost World is an indie comic series by graphic novelist Daniel Clowes, which appeared in Eightball #11–18 between June 1993 and March 1997. It follows Deadpan Snarkers Enid Coleslaw and Rebecca Doppelmeyer as they face the summer after high school graduation.

The character of Josh, an alienated friend (and quasi-love interest) of Enid's (and Rebecca's), also plays a major role in the comic.

Enid and Rebecca's conversations would not be out of place in a Daria episode, though they lack the moral core which would make them that kind of Deadpan Snarker.

A film adaptation was released in 2001, directed by Terry Zwigoff and featuring Thora Birch as Enid and Scarlett Johansson as Rebecca.

Not to be confused with the tropes Ghost Planet, Ghost Town or Ghost City.