Film / Arthur and the Invisibles 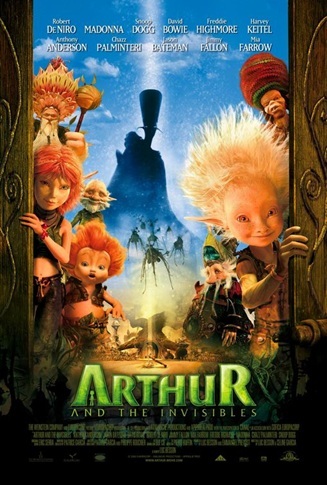 Arthur and the Invisibles (or Arthur and the Minimoys in non-anglophone territories) is a part-animated, part-live action feature film adaptation of the 2002 children's book Arthur et les Minimoys, and the 2003 sequel novel Arthur et la Cité Interdite, which had been written by filmmaker Luc Besson, who also directed the film. Released on November 29, 2006, in France; December 29, 2006, in North America, and February 2, 2007, in the United Kingdom. With a budget of €65 million, Arthur and the Invisibles was briefly the most expensive French film production until surpassed by Astérix at the Olympic Games.

The story occurs in 1960. Ten-year-old Arthur is living with his grandmother in a quiet country house. His grandfather Archibald has recently gone missing and Arthur sees little of his parents. His grandmother entertains him by reading stories to him of his grandfather's adventures in Africa. One of these stories is about the friendship of the tall, Masai-like tribe called the Bogo Matassalai with the Minimoys, tooth-sized, elfin beings whom they believe to be their counterparts. Arthur eventually encounters a tribe of Minimoys nearby, aiding them in their attempts to thwart a threat poised to destroy them.

12 years after the end of the trilogy, a Darker and Edgier meta spin-off was released in June 29 in France called Arthur : The Curse, produced by Besson.

Arthur and the Invisibles provides examples of: