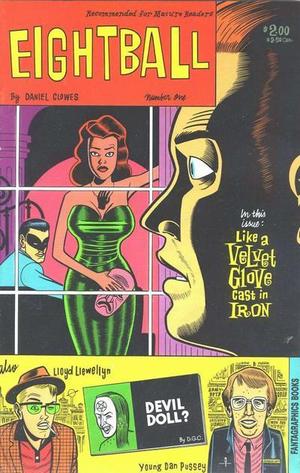 Eightball is a comics anthology series written and drawn by Daniel Clowes. It was first published in 1989 by Fantagraphics Books as a Spiritual Successor to Clowes's previous comic series Lloyd Llewellyn.
Advertisement:

While early issues of the series tended to focus on humor and social satire, the subject matter shifted over the run to focus more on character-driven dramas. As Clowes's writing began taking on more of a novelistic voice, the series began to focus on longer stories, and the anthology format (wherein Clowes would showcase a variety of artistic and writing styles in works that ranged anywhere from single page joke strips to serialized urban horrors) was seen less and less.

Throughout the series, Clowes makes many allusions to comic book culture, particularly to the Silver Age comics of Marvel and DC. Some of the strips written in homage to this era include "Black Nylon"—about a delusional superhero—and The Death Ray—a stand-alone story about a genuinely superpowered teen who derives his abilities from nicotine. This fascination with the larger comics world is also embodied by one of the series few recurring characters, Dan Pussey. A comic artist who rises to a short-lived fame followed by a long-lived obscurity, Dan's tale is a fictionalized blend of the biographies of several comic artists whose careers saw severe ups and downs, such as Steve Ditko, Rob Liefeld, and the team of Siegel And Shuster.

Several Eightball strips have been adapted for the screen, including Ghost World and Art School Confidential.

Tropes found in Eightball include: