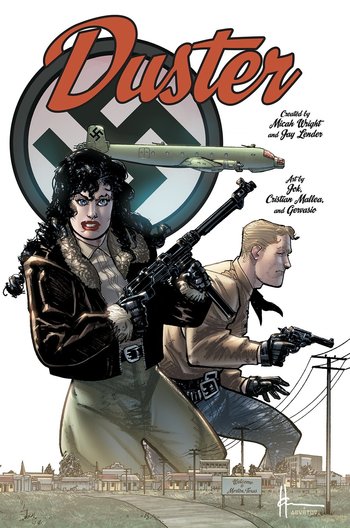 Duster is a Comic Book by Micah Ian Wright.

Joanna "Jo" Baker is a widowed woman in Texas trying to make a living as a crop duster for her family's farm at the tail end of World War II. It being The '40s, she's kind of looked down upon it by others. Still, she soldiers on, since someone has to make ends meet.

However, one day, a crash occurs near her farm. That would be unfortunate enough, but the people behind the crash turn out to be Nazis who have reached American soil. Now, Jo, with the help of discharged sheriff Gideon, needs to protect her home against these invaders.