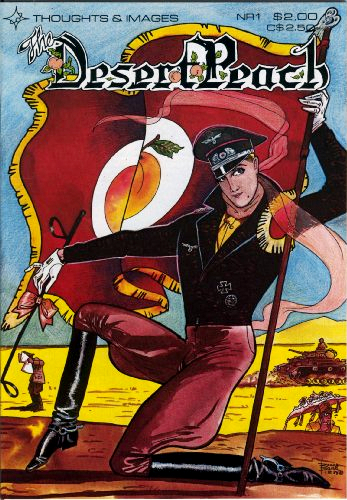 Stupid Sexy Pfirsich. . .
Erwin: [War] is not a game! What would you know about it? All you care about it is whether you can get the correct brand of mineral water!
Pfirsich: Maybe if more people worried about the things I worry about, and less about the things you worry about, we wouldn't have all this silly war business.
Advertisement:

Pfirsich is a colonel (oberst) running a small support unit of gravediggers in the Afrika Corps. He's helped by his trusted orderly Corporal Udo Schmidt, annoyed by the Nazi-supporting Lt. Kjars Winzig and loved by his handsome fiance Rosen Kavalier.

Pfirsich's unit doesn't really fight in battle, and the Peach likes it that way. Most of the comic revolves around the interactions between the characters, the various messes they get into, and how they deal with war. The Desert Peach is notable for its incredibly human characters, who all have faults and make mistakes yet are still heartwarming and engaging. It's also one of the few works of fiction that remembers that the Wehrmacht wasn't entirely made of up people who committed atrocities against innocent people, though this is helped by the focus on the African Front - a part of the war in which the stakes were lower than in Europe, and the resistance from the local population was also low. The story does well to present everyone as human throughout, something many stories that focus on the Wehrmacht's cruel and brutal acts fail to do.

Originally published in print, it's now being available online for 1.5 dollars per 500 page volume. http://www.lulu.com/shop/donna-barr/the-desert-peach-collection-volume-one/ebook/product-17573115.html