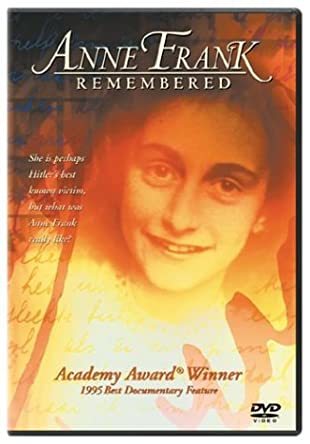 Anne Frank Remembered is a 1995 documentary directed by Jon Blair.

It is, naturally, a documentary about Anne Frank (1929-1945), author of the world-famous The Diary of a Young Girl. The documentary, using a fairly standard format, sketches out the history of the Frank family. Otto Frank serves in the German army in World War I before marrying Edith Hollander. They have daughters Margot and Anne in Germany but flee for Holland after the 1933 Nazi takeover.

The Nazis conquer Holland in 1940, however, and after enduring two years of increasingly brutal anti-Semitism, the Frank family hides in the "Secret Annex", a hidden apartment over Otto Frank's spice business. There Anne spends two years writing the diary that would become one of the most famous memoirs in the history of the world. After two years of hiding the Franks and the other Jews hiding in the apartment are discovered and arrested by the Germans in 1944. Of the eight people living the cramped apartment, only Otto Frank survives the war.

The film includes interviews with Miep Gies, Otto Frank's employee who helped hide the family, neighbors and schoolmates who knew Anne Frank in Amsterdam, and prisoners who saw her in both Auschwitz and Belsen (where she died in February or March of 1945). Also included is archival interview footage of Otto Frank, who died in 1980 at the age of 80.