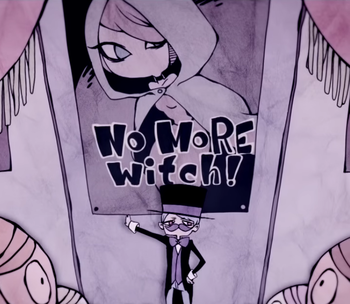 How pitiful... manipulated by speculation, now no longer human
Pointy-Haired Boss: Look what one of our engineers said to a reporter!
Catbert: [reading newspaper] "Our technology is putrid, but we compensate by ignoring complaints."
Pointy Haired Boss: You know what would be more fun than fixing those problems?
Catbert: WITCH-HUNT!!!
— Dilbert, July 17, 2003

There is a menace in this community. They may look like us, but they are not us. They lurk among us, waiting for their chance to do us harm. Anyone could be one of them: your neighbor, your friend, even a member of your family. But don't be fooled, they're only pretending to be your loved one. In reality, they are a witch/child molester/Communist/devil worshipper/male sexual predator/gay man/racist/anarchist/conservative/Christian/shape-shifter! We must root out this menace and destroy them, no matter what steps we have to take. After all, the community's safety is far more important than niceties like civil rights, the First Amendment, the presumption of innocence and due process, right?

A trope that came into its own in The '50s as a metaphor for paranoia about Communists in the United States. A community believes that some of its members are secretly enemies in disguise, and attempts to find out which. Hysteria rises, often due to one or more people trying to take advantage of the fear to satisfy personal grudges or advance themselves socially and/or politically. Inevitably, innocent people are accused and promptly Convicted by Public Opinion, if not literally convicted by a Kangaroo Court, often dying or having their lives ruined.

Turns the community into All of the Other Reindeer, and often includes a Torches and Pitchforks scene, and when the target is "witches" can lead to the so-called witch getting burned at the stake.

A frequent "twist" is that the person doing the most to urge on the Witch Hunt is actually one of the enemy group, knowingly (in which case he's conducting it to get rid of his rivals, or to spread chaos among the populace, or just to divert suspicion away from himself, regardless of how well this last strategy holds up to Fridge Logic) or otherwise (Tomato in the Mirror). Of course, this twist relies on the enemy group actually existing in the first place.

Today, the Witch Hunt has become synonymous with any wild, unfounded hunt for a nebulous 'enemy', in which actual, fact-based evidence, if such exists in the first place, is scarce or exaggerated.

Compare Ten Little Murder Victims, Van Helsing Hate Crimes and Hero with Bad Publicity. An organized system of Training the Gift of Magic may be instituted to reduce the risk of witch hunts. Not to be confused with The Witch Hunter, who hunts actual witches; a Witch Hunt can be organized against any kind of enemy.

The Tillermans play a board game called "Salem Witch Hunt", in which the players try to figure out which player is the witch. It gets out of hand when they go overboard.

The Tillermans play a board game called "Salem Witch Hunt", in which the players try to figure out which player is the witch. It gets out of hand when they go overboard.