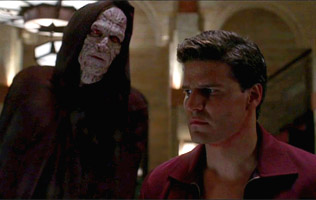 At Cordelia's place, Angel is explaining their new assignment: researching the Hyperion Hotel. There's no client involved, but Wes is clued in that it's personal for Angel. Flashback to 1950s: The hotel in its prime, and Angel's a guest. He's surprised by a young woman named Judy hiding in his room. Angel's about to throw her out when someone tries to pick the lock. Angel opens the door to discover a P.I. kneeling at the door. The man flashes his gun and is about to invite himself in when Angel instead slams the door into the man's nose and then shoves him into the elevator.
Advertisement:

A salesman next door is talking to thin air as he handles a gun. A shot rings out. The hotel manager and Frank the bellhop go to check out the suicide - the third one in three months! Down in the lobby, the residents of the hotel are discussing the suicide. An older man sits apart from the debate. He hears a voice whispering to him. Within minutes, everyone is aboard the paranoia bandwagon. Angel reveals to Judy that he knew her "boyfriend" was actually a private investigator. She finally comes clean: she stole some cash from the City Trust Bank in Salina, Kansas. She was angry because the bank fired her for being part African-American.

More cutting between the present and 1952. Wesley and Cordelia find a history of murder and death leading up to the hotel's closing in 1979. Wesley deduces that something in the hotel was making people crazy, something which Angel also begins to suspect in 1952. Angel is at a bookshop to do research on the Thesulac, a paranoia demon that feeds on people's fears. Denver, the owner, gives him the 411: If it becomes corporeal after a big feed, this offers an opportunity to kill it. Denver is surprised that a vamp is trying to help humans — so is Angel.

Angel arrives back at the hotel but the lobby is deserted. When he arrives on his floor, he discovers why. The mob is swarming Judy, accusations flying. She announces that Angel's the murderer. Why, he even keeps blood in his room! The angry mob turns on Angel. They chase him out into the lobby and hang him from the rafters. As Angel hangs there, the fervor dies out and they all flee to their rooms. When everyone else is gone, Angel reaches up and undoes the noose. The Thesulac, now fully sated and corporeal, gloats that Angel really did reach Judy. And she turned on him anyway. Angel bitterly tells the demon to "Take 'em all," and walks away.

Present Day – The ritual complete, the Thesulac appears before them. He speaks of how he's been feeding all these years and it just gets better with age. A brief battle ensues, and Angel grabs one of the demon's tentacles and stuffs it into the fuse box, electrocuting the Thesulac. Angel walks up the stairs to Judy's room. She's still there, aged fifty years. She recognizes Angel and asks him for forgiveness. A deeply-shaken Angel grants it. Finally at peace, she dies of old age. Angel returns to the others downstairs. They can't wait to be getting out of there. Not so fast, Angel says; Angel Investigations is moving in.