Recap / Star Trek: The Next Generation S4E21 "The Drumhead" 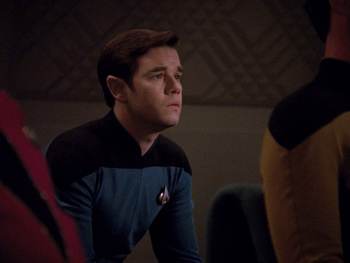 This is Simon Tarses. He's got a good reason to be scared.
Worf: Sir, the Federation does have enemies! We must seek them out!
Picard: Oh, yes. That's how it starts. But the road from legitimate suspicion to rampant paranoia is very much shorter than we think. Something is wrong here, Mister Worf. I don't like what we have become.

Things are tense aboard the Enterprise. A few days ago, an explosion in the engine room put the warp core out of commission and several crew members in sickbay. Sabotage is suspected, and all signs point to J'Dan, a Klingon scientist currently serving aboard the Enterprise as part of the Federation–Klingon Officer Exchange Program (remember that?). Starfleet Intelligence has discovered that several design specs and schematics of Enterprise systems have fallen into Romulan hands right about the time J'Dan started serving aboard. J'Dan denies the charges, naturally, but his behavior during and immediately after the inquiry raise suspicions. Troi detects that he's hiding something, and as Worf escorts him back to his quarters, J'Dan tries to bribe him: he's got powerful friends back on the Klingon homeworld, he claims, and if Worf would help him escape the Enterprise he could see what he could do about that whole family disgrace thing Worf has. Fortunately for him, Worf has enough presence of mind to wait until they've gotten back to his quarters before sucker-punching J'Dan and promising him that he'll expose his spying ways.

A short time later, the Enterprise receives a visitor. Starfleet Command has been watching the situation and have deemed the threat of espionage significant enough to warrant a formal investigation. To that end, they have plucked legendary intelligence expert Admiral Norah Satie (Jean Simmons) out of retirement, and with her arrival the investigation kicks into full gear. Security footage of the explosion indicates a sudden catastrophic failure of the dilithium chamber's hatch, which could well be the result of sabotage. Furthermore, Worf has discovered that J'Dan's personal hypospray has been modified to download information from the Enterprise's computer and encode it intoa biological sequence. Several people who have left the Enterprise while J'Dan has been serving there have since mysteriously disappeared. It would seem that J'Dan has been using random people as "data mules," injecting them with the encoded information, and then directing his accomplices to abduct them. Satie is so impressed by Worf's work that she requests that he be part of her investigation team, and that he lead the interrogation of J'Dan.

Confronted with this new evidence, J'Dan cracks, admitting that he's a spy for the Romulans and a traitor to the Empire. However, he still claims to know nothing about the warp core explosion. It's a puzzling thing that he refuses to admit to this in the light of the rest of the evidence against him, but that sets Satie's suspicions off. She finds it hard to believe that J'Dan was acting alone, and if he was in fact telling the truth, then he might not be only spy aboard the Enterprise. She continues her investigation, focusing on the Enterprise medical team, as they were the ones with the most frequent contact with J'Dan. Picard is uneasy with the course the investigation is taking, but Satie assures him that it's just a routine inquiry. And that she and he are a team, the Enterprise and her crew are his command, and she will not step on his toes.

The investigation proceeds, and it soon uncovers a suspect: Simon Tarses, a quarter-Vulcan medical technician who most often attended to J'Dan when he came into Sickbay for his regular checkups. During his interview, Tarses is cooperative but extremely nervous. And Sabin Genestra, Satie's Betazoid aide, senses that he's hiding a very big secret.

Satie immediately recommends that Tarses be watched and his movements restricted, but Picard disagrees. There is no evidence that Tarses is really a spy; all they've got to go on is a Betazoid's read of his emotions and, well, who wouldn't be nervous in his situation? Before this argument can go much further, LaForge checks in. The engine room is clear, and he and Data have finished their investigation. The explosion was not due to sabotage. The chamber hatch failed due to metal fatigue. It was an accident. The fact that it happened at the same time there was a spy on board was a complete coincidence.

This doesn't stop Satie, however. She's convinced Tarses is hiding something, she's determined to root it out. She calls him back for another inquiry—and this time she opens the hearing to the public. Genestra tears into Tarses, firing off hostile question after hostile question, even outright lying about the cause of the explosion, until finally he makes his biggest accusation: the secret Tarses has been hiding is that he lied about his heritage on his Starfleet application. His grandfather wasn't Vulcan; he was Romulan.

This whole situation is now leaving a bad taste in Picard's mouth. First he speaks to Worf about it. But Worf believes that the Admiral has the best interests of the Federation at heart, and he's adamant about working with her to root out these Romulan collaborators. Then Picard speaks to Simon Tarses privately, to get to know the man a little. He finds that all Simon is really guilty of is being too enthusiastic about joining Starfleet; lying on his application was his way of trying to head off any questions about his loyalty (ironically, the very thing that led to all these questions now). And now, Tarses laments, the career he worked so hard to build is done.

Finally, Picard confronts Satie. This has gone on long enough, he says. He will no longer cooperate with her investigation, and if she refuses to stop interrogating his crew, he will go to Starfleet Command directly. Satie counters with the fact that Starfleet Command authorized her to do this, and furthermore, the head of Starfleet Security, Admiral Thomas Henry, is on his way to the Enterprise to personally observe the further investigations. The inquiries will continue with Henry in attendance — and Captain Picard himself will be the next one on the stand.

When Picard takes the stand, he's immediately called to account for nearly every black mark on his record, from his occasional bending of the Prime Directive to his assimilation by the Borg. At this point, Worf finally realizes this is getting out of hand and tries to defend his captain, but he's smacked down by Genestra, who calls his loyalty into question due to his family's alleged collusion with the Romulans. Picard responds to these accusations by quoting the words of Aaron Satie, renowned Federation judge and Norah Satie's father, regarding personal freedom and suppression of rights.

Picard quoting her beloved father's words back to her causes Admiral Satie to go berserk, launching into a scathing tirade that exposes her as a paranoid tyrant. The crowd turns against Satie, and Admiral Henry leaves the room in disgust without a word.

The hearings are stopped, Admiral Henry leaves, and Admiral Satie is sent back out to pasture. Worf and Picard discuss the events of the last few days, and Worf beats himself up for allowing himself to be Satie's tool. Picard assures him that he wasn't alone, that those who spread fear in the name of righteousness are not always easy to spot. And that the cost of freedom from tyranny is to be on guard against people like her.

Picard: Vigilance, Mr. Worf. That is the price we have to continually pay.

Tropes featured in "The Drumhead" include: