Recap / Star Trek: The Next Generation S4E24 "The Mind's Eye" 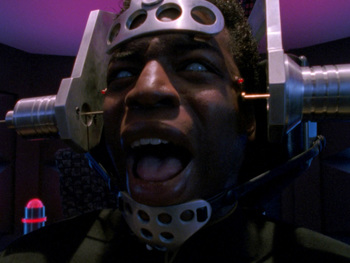 Geordi gets Brainwashed, and it's every bit as messed up as it looks.
Advertisement:

Geordi is traveling to Risa to attend a cybernetics symposium and for shore leave. While distracted by a trivia game with the computer, he belatedly notices a Romulan warbird decloak dead ahead. Geordi tries to send a distress signal, but nothing works. The shuttlecraft is locked in a tractor beam, and he's immediately transported off.

Meanwhile, the Enterprise is en route to the Klingon colony of Krios, which is in the midst of an insurrection. The Klingon governor, Vagh, has accused the Federation of arming the rebels, and Klingon ambassador Kell is accompanying them to examine the evidence, personally requesting Picard's help.

Aboard the warbird, Geordi is dragged into a room and strapped into a chair, where Romulan Subcommander Taibak "warmly" greets him. After an impersonator is sent to Risa in Geordi's place, Taibak has Geordi's VISOR removed, and connects a device directly to his neural implants. This device sends various images, primarily horrifying, directly to Geordi's visual cortex, making him unable to ignore them. A shadowy figure with a familiar voice asks if there'll be any trace of their conditioning. Taibak assures her that because of Geordi's preexisting implants, any conditioning would be impossible to detect. He changes to another disturbing image as we zoom in to see Geordi screaming in agony.

We return to the Enterprise, where Ambassador Kell probes Worf's loyalty to Picard. Worf stands by Picard and insists that he will do everything he promised to the Klingon Empire. Before Worf leaves, Kell tells him that he did the Klingon Empire a favor in killing Duras. Although Worf retorts that he had his own reasons for doing so, Kell insists that he behaved as a proper Klingon. Worf acknowledges the unexpected compliment.

We cut to Ten Forward, or rather, a holographic recreation, where Geordi, Taibak, and his Romulan subordinates are standing. Taibak orders Geordi to shoot and kill the holographic Chief O'Brien with a phaser, but while walking over, Geordi hesitates. After a little coercion, Geordi shoots and kills "O'Brien." Unsatisfied with his hesitation, Taibak sends Geordi back for another conditioning session. Once Geordi is ready, Taibak plans to have the man's conditioning tested by sending him on a few benign errands before his main mission.

Geordi returns to the Enterprise completely at ease and with no memory of his abduction and brainwashing. He shares stories of Risa, including a romantic interlude. Even Troi is fooled. Shortly afterwards, Data starts to find sporadic E-band emissions.

On Krios, Picard vehemently denies the Federation's involvement until Vagh presents a confiscated phaser rifle taken from a rebel stronghold. It appears to be a Federation rifle; Vagh allows Picard to take one for analysis, saying that he's confiscated hundreds more. Meanwhile, after completing his shift in Engineering, La Forge heads to Ten Forward where we see a setup similar to the Romulan holorecreation. After ordering a drink, Geordi walks up behind O'Brien... but simply spills his drink on the chief's shoulder. When O'Brien leaves to change his uniform, Geordi seems to have no idea why that happened.

Data and Geordi analyze the weapon and determine that it is a Romulan knock-off. Picard presents that evidence to Vagh. The governor is skeptical, but he agrees to have his own people verify the claim. While in the office, La Forge's VISOR receives another distinctive E-band transmission. On the bridge, Data and Riker detect this E-band emission, but note the intensity of this emission has changed meaning that both E-band transmissions originated in different places. Acting under mind control again, Geordi beams down a crate of weapons from a cargo bay to the surface, deleting the transporter logs afterwards. Just as the Enterprise is about to leave, Vagh sends a transmission, telling Picard that they have intercepted the crate, and that they are not to not leave orbit until further notice, as a Vor'cha-class attack cruiser and two Birds-of-Prey decloak and intercept them. Kell is able to convince Vagh to allow for the Enterprise to investigate what exactly happened.

Geordi and Data use power flows to determine that the perpetrator used the replicator power sources to perform the transport. Worf questions Data, Geordi, and O'Brien on their whereabouts during the transport, as both (along with a fourth crewmember) have the expertise to perform such tasks. While Data and O'Brien (along with the fourth crewmember) have alibis during this period, Geordi does not. Geordi and Data relay their findings to Picard, where Ambassador Kell is also present. Kell offers to speak to Vagh, urging him to come to the Enterprise to witness the investigation. At that very moment, Geordi's VISOR picks up a third E-band transmission. Riker notifies Data of this development, and Data explains that the E-band transmissions may be linked to the ongoing insurgency. Before Kell leaves, however, Geordi meets with him in his quarters, where it's revealed that Kell has been conspiring with the Romulans, being the one transmitting the E-band emissions. Kell tells Geordi that the investigation is moving faster than he had expected, risking Geordi's cover. He also informs Geordi that when he returns with Vagh, Geordi is to assassinate him, claiming he is acting on behalf of the Federation in support of the rebels. That night, Geordi has difficulty sleeping, first contacting Chief O'Brien to see if he's okay, then going to sickbay. Crusher notices some odd readings in his optic implants and advises him to have his VISOR checked out next month.

The next morning, Vagh arrives to witness the investigation at Kell's insistence. Kell suggests visiting Cargo Bay 4. Picard agrees. Meanwhile, Data and Riker discuss the E-band transmissions, with Data finding that the first and third emissions happened on board the Enterprise while the second took place on the surface of Krios. After some analysis, Data finds that the E-band transmissions would be compatible with Geordi's VISOR. Meanwhile, Geordi heads to Cargo Bay 4 but before he can perform his task, Chief O'Brien asks La Forge to assist him with a task involving the Cargo Bay transporter.

Data goes to the shuttle bay containing the shuttle that Geordi used to get to Risa. He determines that the memory chips in Geordi's shuttlecraft have been replicated by Romulans, and that the hull has been subjected to stresses consistent with a tractor beam. He tries calling Geordi, but he doesn't respond. Data calls Worf, ordering him to take Geordi into custody immediately.

Geordi finishes helping O'Brien with his work and proceeds to perform his task to assassinate Vagh. Worf spots him and rushes towards him, but he's restrained by Vagh's guards, erroneously mistaking Worf's actions as hostile. Worf yells out a warning to Picard, who stops Geordi. Vagh is now quite convinced of a Federation plot against him, leaving Picard at a loss until Data arrives, revealing that Geordi has been acting under Romulan control. He explains that the E-band transmissions which preceded each suspicious act aboard the Enterprise were transmitted directly to Geordi's brain through his VISOR. The signals would have to have been transmitted in close proximity to Geordi by a Romulan agent. As to who that agent is, Data reveals that only two people were close to Geordi at all three of the times a signal was recorded: Picard and Kell. With the fact that Picard just saved Vagh's life, everyone, including Vagh himself, stares at Kell.

Data suggests that the Romulan agent must be hiding an E-band transmitter on his person. He recommends both Picard and Kell consent to a search. With his cover blown, Kell blusters that, as a representative of the High Council, he will not consent to be body-searched, but Vagh has his bodyguards place the ambassador under arrest, saying they will take him back to the planet and search him there. Kell formally requests asylum aboard the Enterprise. Picard coolly rejoins that he will be happy to grant asylum—after Kell is absolved of any crime. Vagh signals the planet, and the Klingons are beamed away.

Later, Geordi is talking to Troi, where he begins to realize that his memories of his trip to Risa are false. Troi promises to work with him to restore his memory, and she begins by asking Geordi what happened after he saw the Romulan ship — a question that leaves Geordi stumped, and worried as the full horror of the violation against him begins to sink in.

Tropes featured in "The Mind's Eye" include: