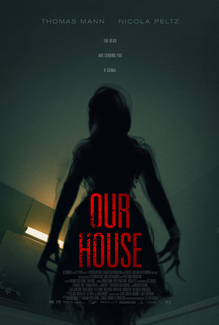 Our House is a 2018 Horror / Drama film directed by Anthony Scott Burns, written by Nathan Parker, and starring Thomas Mann, Kate Moyer, Nicola Peltz, and Percy Hynes White. Ethan (Mann) is a college student visiting his family, consisting of his parents, his younger sister Becca (Moyer), and his younger brother Matt (White). Much to the dismay of his family, he leaves after dinner to finish up an experiment at the college alongside his girlfriend and co-creator Hannah (Peltz) where they are attempting to prove the utility of their wireless power transmission machine. The experiment fails without them noticing the black smoky mass emanating from the machine and the lightbulb. The next day, Ethan receives a phone call indicating that his parents had both died in a car accident.

The movie cuts to a few months later where Ethan is acting as a surrogate parent to his younger siblings, working in a part-time job in an electronics shop during the day, and fiddling with his machine in the garage at night. Unknownst to him, his machine is able to bring certain spirits through to their world and soon Becca, Matt, and Ethan find they may have their parents back with them. Or maybe, it's something else...