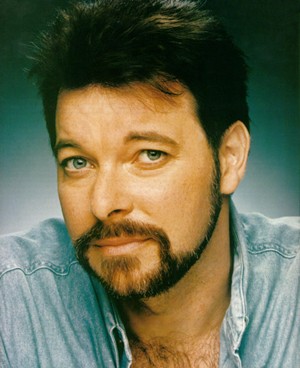 Jonathan Scott Frakes (born August 19, 1952 in Bellefonte, Pennsylvania) is best known for two things: the voice of Xanatos (whose design was based on him) in the animated series Gargoyles and the role of Commander William Riker, aka Number One, in the critically acclaimed Star Trek: The Next Generation. Both of which were excellent showcases for his beard and Badass Baritone voice. He is also one of the few actors to have appeared in all five TNG-era Trek series (TNG, DS9, Voyager, Picard and Enterprise)

A well-regarded actor with a long and respectable career, he's largely stepped away from being in front of the camera in favor of becoming a prolific television director. As a director, he is known for a highly economical shooting style that earned him the nickname of "Two Takes Frakes" during the production of Star Trek: First Contact. Shows he's directed episodes of include:

He also had a brief stint as a feature film director, making films that ran the gamut in terms of quality and acclaim. His films include Star Trek: First Contact (widely considered one of the finest Star Trek movies ever) and Star Trek: Insurrection (widely considered one of the worst), as well as Gargoyles, Clockstoppers, and two The Librarian movies. All of which have Star Trek references in them at his insistence. However, his theatrical directing career was brought to a screeching halt with the notorious flop that was Thunderbirds (he even called himself the "alleged director" on the DVD commentary), although it was more Universal's fault as well as the lengthy Development Hell the film went through than anything he did as a director.

He continues to make the occasional on-screen appearance, having played a dramatically heavy role in Criminal Minds and hammed it up in Angie Tribeca. He also likes to insert himself into shows he directs, making very brief blink-and-you'll-miss-it cameos. He eventually reprised the role of William T. Riker in Star Trek: Picard, which he found surprisingly daunting as it required an amount of acting he hadn't done in a long time; he also reprised the role in voice form for Star Trek: Lower Decks. He's also narrated viral

Jonathan Frakes is the famed Trope Maker for Growing the Beard. Because there had been a writers' strike between the first two seasons of Star Trek: The Next Generation, he literally grew a beard during the unexpectedly extended break — see the page photo. Its presence at the script readthroughs for the second season was mere happenstance and he was planning on shaving prior to shooting, but Trek creator Gene Roddenberry felt it gave him a far more dignified appearance and decided to Throw It In to his character's appearance too. The beard staying then coincided with, and has become synonymous with, with the show's generally-agreed development from something good into something great in the next year or two. All thanks to Frakes' facial fuzz.

Frakes is a part of one of the most successful Hollywood marriages in the history of celebrity-dom. He and his wife, actress Genie Francis (of General Hospital fame, who he met while making North and South (U.S.)) have been married since 1988.