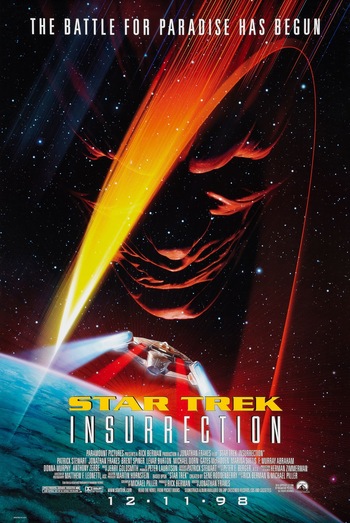 Actually NOT a movie about the Enterprise fighting a giant ghost face in space.note Anyway, they already have.

Picard: Ru'afo, we're getting too old for this.
Ru'afo: After today, that won't be a problem... for either of us.
Advertisement:

The One With… the facelift aliens and the Space Amish.

Star Trek: Insurrection is the ninth movie in the Star Trek film series, released in 1998.

Joining forces with some unsavory Rubber Forehead...and face... Aliens offering their friendship, The Federation decides that the Prime Directive is suddenly optional so that they can relocate the new-agey Space Amish inhabitants of a paradise planet. After all, Utopia Justifies the Means, right? The Enterprise crew uncovers the plot and rebels against Starfleet (hence the title) to save the day.

Of all four TNG films this is generally considered to be the one that most closely matches its parent series in style and tone, for better or for worse. It has often been described as a "two-parter episode made for the big screen". Longtime TNG showrunner Michael Piller, who never wrote for the big screen before (or again), received sole credit for the film's screenplay.

Tropes seen in Insurrection include: