Recap / Star Trek: The Next Generation S2E2 "Where Silence Has Lease" 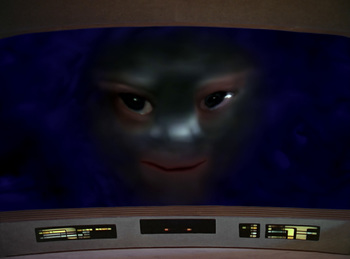 Thanks, Nagilum, but we already have a godlike being coming around and playing sadistic games with humans.
Advertisement:

The Enterprise is underway. Captain Picard is worried about Worf and Riker, who seem to be stranded in a mysterious jungle. The pair are attacked by monstrous humanoids and must fight back. After defeating their foes, Worf gets caught up in battle fever and nearly turns on Riker, who sharply stands him down. It turns out that they're in the holodeck, doing what Worf describes as rather light "calisthenics."

The Enterprise encounters a patch of space that is completely black, with no stars visible. After it swallows two probes without a trace, Worf is reminded of an old Klingon legend about a space monster that devours ships. Suddenly the Enterprise is engulfed in the blackness. When they try to leave, they discover that they simply loop back around to where they started. Then a Romulan Warbird appears and fires upon them but is immediately felled with one photon torpedo, leaving no debris. Things get weirder when the Enterprise's sister ship, USS Yamato, arrives with no life signs aboard. Riker and Worf beam aboard to find that nothing in the ghost ship is where it's supposed to be. As reality seems to loop in on itself, Worf starts to become unhinged, but the Enterprise beams them back aboard before anything can get worse.

Once the away team is back onboard, Picard orders the ship to make for a small opening in the blackness that suddenly opens up, but once they start heading toward it, it closes. This happens several more times before Picard decides that he's had enough of being toyed with and orders a full stop. Other crewmembers, including Dr. Pulaski, agree that they're being experimented on. Troi also begins to detect an intelligence that was previously beyond her understanding.

Suddenly they're confronted by an entity calling itself "Nagilum." It studies the bridge crew, inquires about sexual procreation, and comments on the fact that humanoids die. It kills the redshirted pilot on the spot to observe the concept. Then it announces that it will conduct a test on "all kinds" of death on up to half of the Enterprise's crew. Picard decides to set the ship to autodestruct to thwart Nagilum's plans.

While the autodestruct counts down, Troi and Data go to Picard's quarters. Troi tells Picard that she has sensed that Nagilum will not be dissuaded from his intentions by the autodestruct, but Picard is unmoved. Data asks Picard to define death, and Picard explains several common theories as well as his own thoughts. Troi and Data then join together to request that Picard cancel the self destruct, saying that it is unfair for him to make the choice to die for them. Picard realizes that neither of them should be acting this way and gets the computer to confirm that Data is actually on the bridge, whereupon they both vanish. Picard says, "Nice try, Nagilum."

Nagilum finally acquiesces and backs out on its desire to conduct its experiments. Picard cancels the autodestruct, and Nagilum remarks that humans and its species are too different to associate. Picard says, "We do have one thing in common: curiosity." Nagilum says, "The point is well taken, Captain!" and chuckles. The episode ends with Picard saying, "We will meet again, but next time, it will be out here, among the stars."