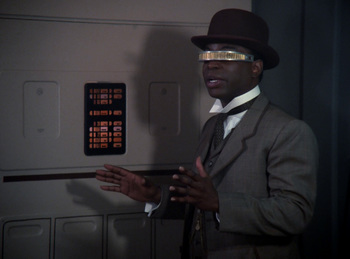 Geordi giving the computer a command he would soon very much regret.
Advertisement:

Geordi La Forge and Data decide to have some fun on the Holodeck by playing the parts of Dr. Watson and Sherlock Holmes. Pulaski comes along and bets that Data can't solve a mystery where he hasn't already read the book first, like he did with all the Sherlock Holmes books.

La Forge tells the computer to create a character capable of defeating Data. Thus the character of Dr. Moriarty suddenly gains sentience (sapience), and kidnaps Dr. Pulaski. Data figures out where she's been taken and encounters Moriarty, who has learned all about the Arch command to summon the holodeck controls, and has thus learned all about the Enterprise.

Eventually Picard himself enters the Holodeck and speaks to Moriarty, who wishes to leave the confines of the Holodeck. Picard explains this is impossible; however, he promises to work on it. He saves the program, and promptly forgets about it for the next few years (until Season 6's "Ship in a Bottle").