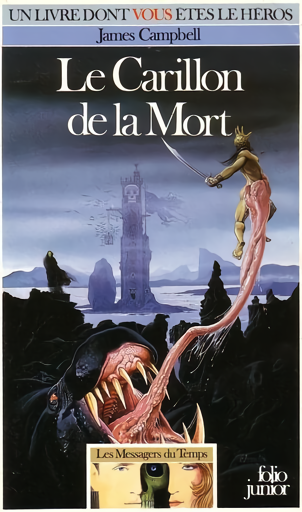 Les Messagers du Temps (The Messengers of Time) is a French Gamebook series in four volumes. It is written by a "James Campbell" that is a pseudonym used by Jean-François Ménard (famous for translating the Harry Potter books in French); the first book came out in 1987. It was marketed as a translated work from English in order to sell better (considering that the popular gamebooks at the time were British works), but a quick glance at the copyright date inside tells otherwise (and lack of the "original" English title).
Advertisement:

The plot is about the Prince and the Princess of Time, the twin children of Chronada, Queen of Time, who rules over the Kingdom of Time in the center of the Earth where people live forever, away from the human world.

Chronada having to leave the Kingdom for other duties, she decides that one of her two children will replace her. In order to choose which one, she sends them on a mission: free the Messengers of Time, four citizens of the Kingdom of Time who are prisoners on the Earth's surface, in different places and time periods. Those people are Gayok the Brave in Middle-Age France, Hensock the Crazy in Paris before the French Revolution, Oclock the Good in the United States during the Civil War and Valiocka the Fair in California in 1989.

Gameplay is directly based on the Fighting Fantasy series, with a special system for hit points lost in battle. There are also moments where you can or you are forced to rely on pure hard luck, by choosing a card among others to cut out of the book.

You can choose to play either as the Prince or the Princess of Time, which has very little influence on gameplay but more on the dialogue.