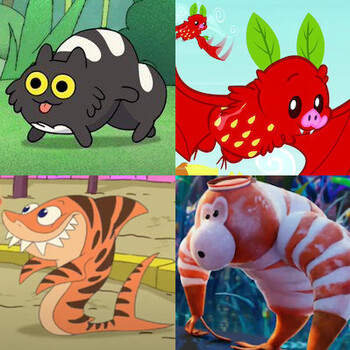 Clockwise from top left: a caterpillar, fruit bats, a shrimpanzee, and a tiger shark.
Advertisement:

A Pun-Based Creature is a fictional critter designed to embody some sort of witticism, which can happen in as many ways as puns themselves do. Often, this occurs when a real-life creature has a name describing its environment or habits that in a work of fiction is taken literally — for example, a forest- or desert-dwelling animal named "wood" or "sand [something]" may be shown as a version of its real counterpart literally made out of wood or sand. Similarly, a syllable or word in a name may be replaced with another, similar-sounding word, with either the base or inserted term being an animal name, to create a beast based on this wordplay.

This is typically done simply as a form of visual humor, exaggerating minor misunderstandings to create absurd creatures based on overly literal interpretations of common phrases.

See also Punny Name. Subtrope of Our Monsters Are Weird and Visual Pun. Supertrope to Seahorse Steed, Swordfish Sabre and Literal Bookworm. Can overlap with Mix-and-Match Critters if the pun happens to combine names from two or more creatures.