Film / The Legend of Lylah Clare 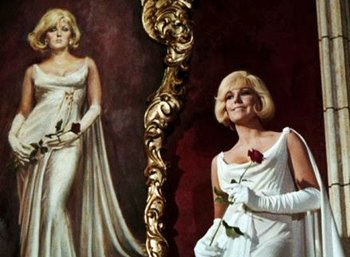 The Legend of Lylah Clare is a 1968 drama film directed by Robert Aldrich.

Lylah Clare (Kim Novak) was an iconic sex goddess of The Golden Age of Hollywood. From humble origins in Germany, she became a star under the tutelage of her mentor (and later, husband), director Lewis Zarkan (Peter Finch). But circa 1948, she died in a horrific, scandalous incident. Zarkan was devastated, and never made another film.

Twenty years later, Zarkan's assistant Bart Langner (Milton Selzer) stumbles onto Elsa Brinkmann (also Kim Novak), a naïve young Hollywood hopeful from New Hampshire, who looks remarkably like Lylah. Eager to become a film producer, Bart concocts a plan: Lewis comes out of retirement to direct a Biopic about Lylah Clare, starring Elsa. Lewis is skeptical, until he meets Elsa and becomes convinced that she can re-create Lylah. Lewis talks film mogul Barney Sheean (Ernest Borgnine) into greenlighting the movie. In preparing for the role, Lewis, Bart and Rossella (Rossella Falk), Lylah's former "dialogue coach", are astonished to find that Elsa has started adopting Lylah's personality, at times seeming possessed by her. Lewis falls in love with her. But can she avoid the tragic ending that Lylah suffered?