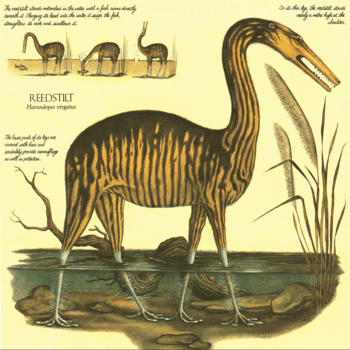 Just one example of the huge diversity of future creatures imagined by both biologists and artists.
Advertisement:

"Speculative biology" (also referred to as "speculative zoology", though it is by no means limited to animals) is a sub-genre of science fiction which combines Speculative Fiction with creature design, and deals with evolution in the future, on other worlds, or in alternate timelines, the same way that many other sci-fi works discuss technology.

The broader genre of speculative biology contains a number of distinct subgenres within itself:

Most of these stories tend to have no defined villains, or if there are, they're mostly just treated as an afterthought as the predators of the ecosystems portrayed in the story are enough of forces to provide conflict to these stories just like their past/earth counterparts. If an antagonistic force is prevalent in the story, it's often either in the form of Evilutionary Biologist who wants to see how humans/certain animals would end up if they hasten their "evolution" or in the form of an invasive species ravaging any ecosystem they weren't in before. Often, there is no real story to speak of, with many works simply stating facts regarding their fictitious ecosystems and life-forms, like a field guide or documentary.

Speculative biology is very popular online among amateur biologists and animal fans, especially on sites like Deviantart and Reddit. This sort of work is also common in fandoms that feature fantastical animals; artists will invoke realism in their works and try to revamp the characters in a way that makes more biological sense. However, it's also a topic that gets professionally discussed. Several books and a few documentaries have also been created on the topic of speculative biology. Most works of speculative biology at least try to obey real-world laws of science and are (in theory) generally harder science fictions, and if any sort of supernatural Hand Wave is involved, Magic A Is Magic A will be in full effect. Indeed, providing real-world explanations for fantastical and fictional creatures (just how do dragons breathe fire?) is another popular form of speculative biology.

That being said, many works of speculative biology are not very biologically rigorous. Many artists end up coming up with inaccurate animals and circumstances that most likely couldn't occur. Every so often however, years later a species is discovered that resembles a previously fictional animal. It's also worth nothing that our ideas of what is biologically plausible and what isn't changes all the time.note For instance, it was believed for a long time that Big Creepy-Crawlies could only evolve in climates with high oxygen levels, until it was recently discovered that the famous giant arthropods of the Carboniferous persisted into the Permian, when the Earth's oxygen had lowered significantly, making it more likely they simply were able to evolve the way they did due to lack of competition with tetrapods.

These works often, but not always, take the form of a Speculative Documentary. Related to Fantastic Science.