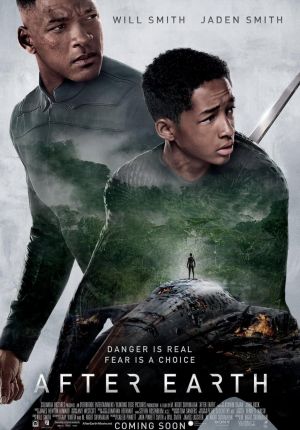 Take a knee, cadet.
"This is a Class 1 quarantined planet. The threats we will be facing are real. Everything in this planet is evolved to kill humans. Every single decision we make will be life or death."
— Cypher Raige
Advertisement:

After Earth is a science-fiction film starring Will Smith and his son Jaden Smith, the second movie to star both Smiths after The Pursuit of Happyness. It was released on May 31, 2013.

Father and son, Cypher and Kitai Raige, are the sole survivors of a spaceship that crashed on a Death World, Earth. Now they must survive long enough to activate the distress beacon in the wreckage of their ship.

The original story idea comes from Smith himself, though he hired a screenwriter to develop the idea more thoroughly. The film's director, M. Night Shyamalan, also made a few passes at it, although his involvement is so downplayed that it isn't mentioned in any of the trailers.

Danger is real, these Tropes are a choice: