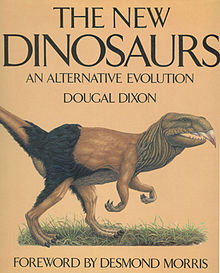 A 1988 book, written by Scottish geologist Dougal Dixon about what life on world would be like if the meteor that killed the dinosaurs didn't hit the Earth. It is a Spiritual Successor to Dixon's previous Speculative Biology book, After Man: A Zoology of the Future, and is presented in a very similar way. However, similar to his previous book, it suffers badly from the progress of science; its creatures are more fanciful than realistic nowadays (even back in the day they weren't exactly the most accurate dinos). Even so, its illustrations and descriptions are very good, depicting these nonexistent animals as if they were real.