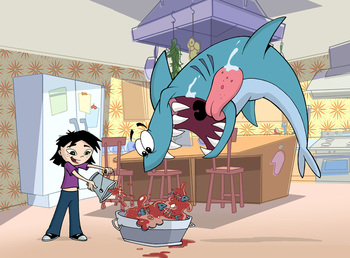 It's not usually wise to be chummy with a shark.
Advertisement:

Aquatic animals capture people's imagination, as they can be both beautiful and terrifying. However, having them interact with human characters is complicated, since they live in a very different element. The solution: give them a way to live on land, of course!

Sub-Trope of Artistic License – Marine Biology. Compare Flying Seafood Special, Sand Is Water. Many examples of Giant Enemy Crab and/or Fish People fall under this trope as well, though neither is exclusively terrestrial. May involve Tailfin Walking. See also Misplaced Wildlife, of which this is a fairly extreme form.

Not to be confused with Fish out of Water, which is something else entirely.